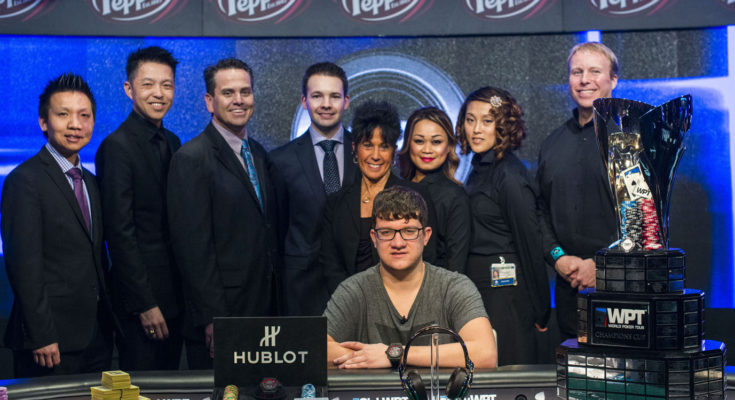 This was his second WPT title, as earlier this season he won the WPT bestbet Bounty Scramble in Jacksonville, Florida.

With two tables left (12 players) Panzica was at the bottom of the chip count, but he found a way to make the final table of six. When play began Friday afternoon he was in third place with 3.2 million chips, but he and the other four players were way behind chip leader and three-time WPT champion Chino Rheem who had 10.65 million.

Because of his massive chip lead and experience, Rheem was the overwhelming favorite to win the crown. But poker tournaments often turn in unexpected directions. 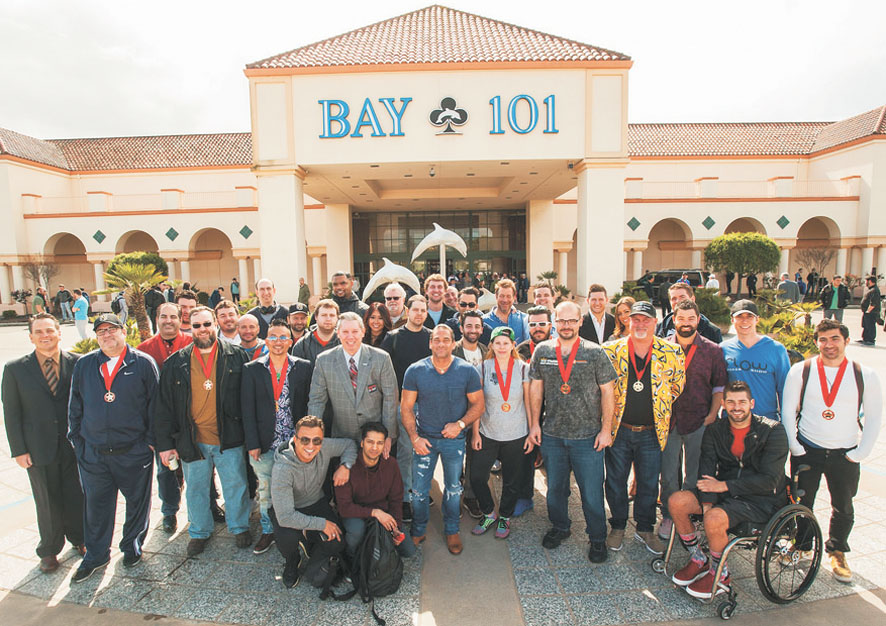 The tournament kick­ed off Day 1A on Monday, March 6 with dozens of stars at the tables and $2,500 bounties on their heads. Players eliminating them also received a Shooting Star Bounty Medallion, and an autographed t-shirt with the bounty’s photo on it. On this day there were 45 stars including Daniel Ne­greanu, Erik Seidel, Mike Sexton, Vince Van Pat­ton, Joe Hachem, J.C. Tran, Antonio Esfandiari, Maria Ho, Matt Glantz, Loni Harwood, Tim West, Dan Shak, Anthony Zinno, and Noah Schwartz.

Ema Zajmovic was the first woman to win an open-event WPT title (at the recent partypoker.net WPT Montreal tournament), but her good fortune did not continue here as she was the first bounty eliminated. Her K-K was looking good against Salvador Seguri­tan’s 2-2 right up until the turn when another 2 showed up. She planned to take advantage of the one re-entry allowed each player by coming back for Day 1B, when she would once again be marked with a bounty. 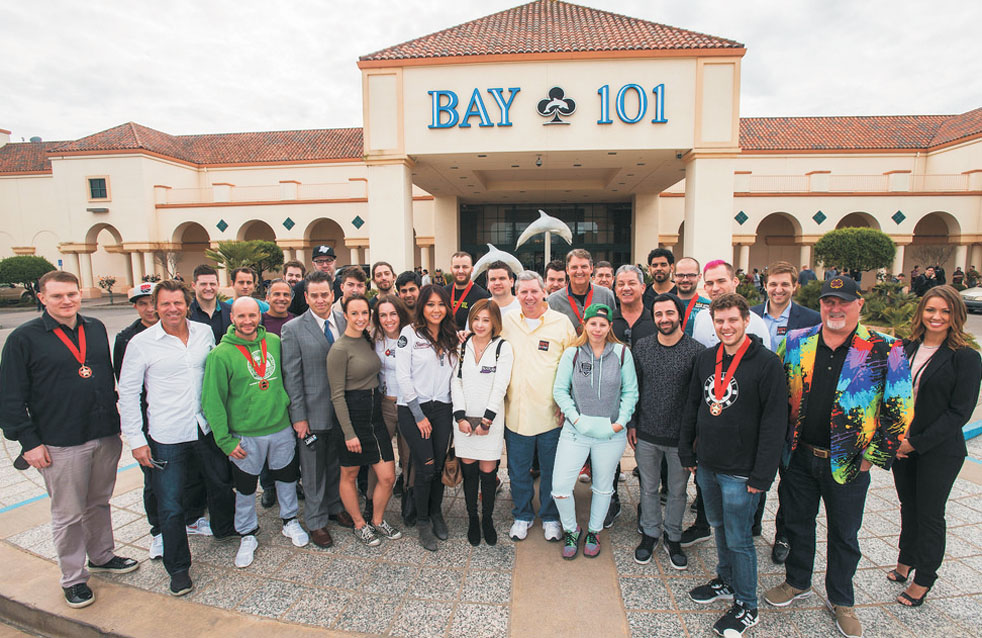 Local legend “World Famous” Pat Lyons was the first Shooting Star Eliminated on this day, shoving with 5-5 on a board of 10-10-7-3-7 and getting called by Todd Wierzbowski’s K-K. Undeterred, Lyons insisted it was all part of the plan and that he would be back soon with his second entry.

Day 2 started with 264 players and would end with the field cut down to 36. However, midway through the day a schedule change was announced: They would stop play at 3:00 a.m. and begin again at 1:00 p.m. instead of noon.

The money bubble burst less than two hours into play, when Oscar Zarate-Ramirez was eliminated in 82nd place when his gutshot straight-flush draw did not improve against Eddy Sabat’s K-K.

Defending champion Stefan Schill­habel went out in 47th place ($19,120) when his pair of nines lost to Shah Shojaeyan’s pair of queens.

Day 3 would end with the final table of six players established. After two hours of play they were down to 36 and began six-handed play. 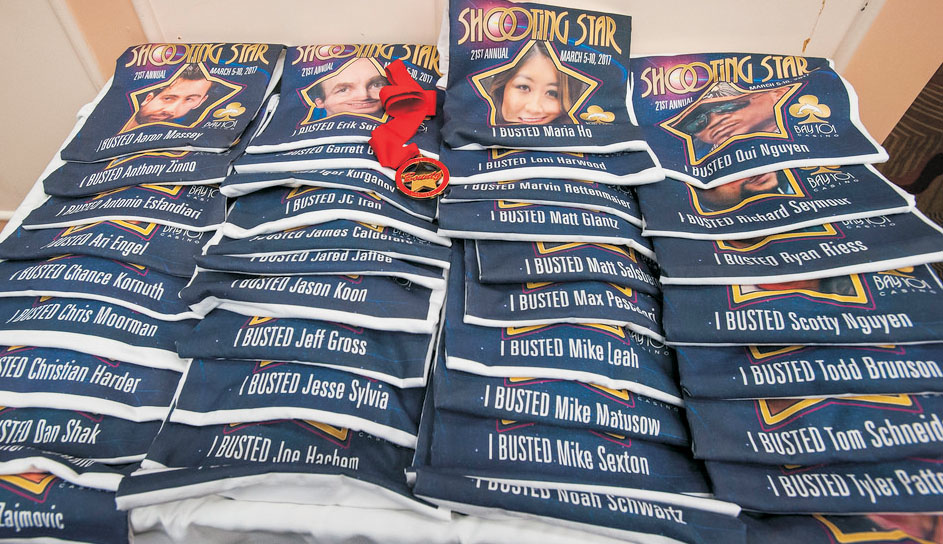 Mai claimed another bounty when he felted Mike Sexton in 22nd place ($30,590). Sexton moved all-in for 268,000 and Igor Yaroshevskyy called. Mai then went all-in over the top and Yaroshevskyy folded, showing 10d-10h. Sexton had A-6 and Mai K-K. Sexton hit his ace on the flop, unfortunately for him Mai also hit a jack for a set. The board wound up Ad-Kd-Jd-Qd-2h and Mai’s set won since neither of them had a diamond. Yaroshevskyy though, folded the 10d. In one of those “if I had only known” moments he saw that he had folded what would have been a royal flush.

David Williams was the next Shooting Star to go when chip leader Sergio Aido eliminated him in 16th place ($36,050) with a straight against Williams’ pair of queens.

Local favorite Mai was knocked out in 14th place ($42,610) when his excellent tournament came to a close after his Kd-Jd couldn’t outrun Kevin MacPhee’s A-A.

Neil Blumenfield, the San Francisco player who came in third place at the 2015 WSOP Main Event had another great run. This one came to a close when he was eliminated in 12th place ($53,530) by Aido’s massive chip stack and A-A against 9-9.

With eight players left Chino Rheem began to make his move. It was a bit up and down though, as he fluctuated from under 2 million to over 4 million. At seven handed Rheem was the chip leader with 4.96 million, but not by much as chip stacks were all fairly close. Over the next several dozen hands he slowly increased his lead. Soon it was 6.6 million, 7.2 million, and 8.5 million. He had hit 10.1 million when the TV bubble popped. Kempe put Aido and his short stack to the test, raising from the small blind. Aido, with only about 10 big blinds, called all-in with K-Q and Kempe showed 8-2. With a board of 7-3-2-J-10 Aido was eliminated in seventh place ($144,760) when his king high couldn’t beat Kempe’s pair of deuces.

Chips bounced around for 36 hands with no major changes (except that Ste­ver­mer had doubled up). Then on the next hand Rheem raised to 225,000 in the cutoff and Kempe moved all-in from the small blind for 2,190,000. Rheem snap-called and turned over K-K. Kempe showed A-9 and when the board ran out 7-6-3-3-8 the last bounty had been eliminated and they were down to five. Kempe’s sixth place was good for $188,460. Rheem now had nearly 13.5 million.

The next significant hand was more than an hour later. Rheem doubled up Spinella with an ace-high flush draw against Spinella’s made flush. Rheem was down to 9.5 million and Spinella up to 7.7 million.

Meanwhile Panzica had been steadily increasing his chips, so that when he took a pot from Spinella on Hand #118 he had moved into second place. By Hand #136 Rheem was firmly back in the lead with 14 million to Panzica’s 5.7 million and Spinella’s 4.4 million.

Panzica took the next two pots, grabbing the lead and then extending it to a gap of 3 million. Soon his lead was over 5 million and Spinella was getting short. Then, on Hand #160 Panzica raised from the button to 500,000 and Rheem called in the big blind. The flop was A-3-2, Rheem checked, Panzica bet 500,000 and Rheem called. The turn was a K and this time Panzica bet 950,000 after a check, which Rheem called. The river was a Q and Rheem checked again. Panzica bet 2.1 million. After more than a minute Rheem called and Panzica turned over A-K for top two pair. Rheem mucked and Panzica had won an 8.3 million pot, giving him a huge lead of 18.3 million to 3 million and 2.8 million.

Hand #167 had Spinella move all-in from the button for 2.375 million and Rheem also moving all-in from the small blind for 2.875 million. Panzica folded. Spinella had K-J and Rheem A-Q. Rheem paired his queen on the flop of Q-6-2, but Spinella caught a king on the turn followed by a blank river to take the hand and leave Rheem with just two big blinds. He was eliminated on the next hand, placing third ($521,660).

Six hands into heads-up play Spinella raised to 650,000 and Panzica moved all-in over the top. Spinella called with his final 7 million holding Ac-8c. Panzica had Ah-10s. The board was Jh-5h-3d-4d-5c. Neither player made a pair, but Panzica’s ten kicker played giving him the title and the $1,373,000. Spinella’s second place finish paid $786,610. 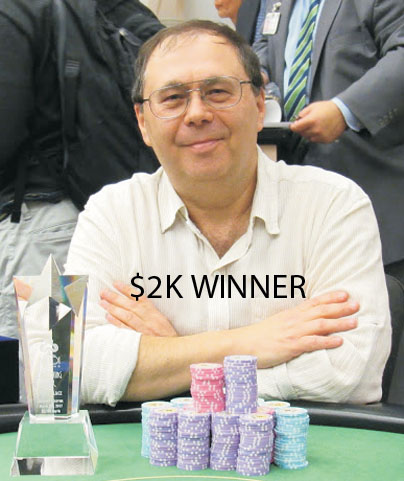