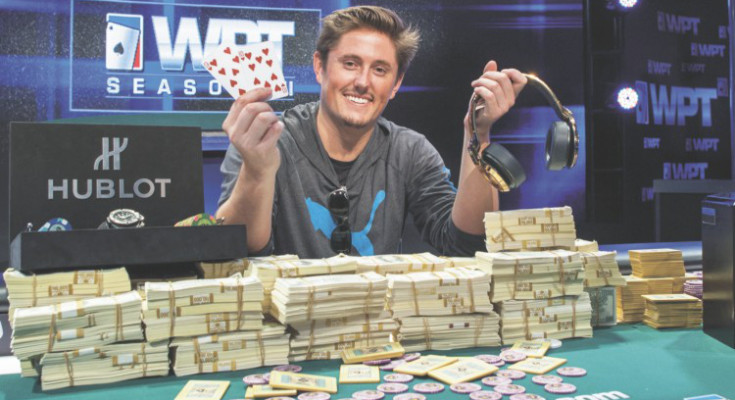 Sundar made the final table at the Shooting Star, settling for sixth place and $168,260. Not to be outdone, he too went to Thunder Valley’s Rolling Thunder Main Event and took down the title, good for $268,857.

They were the first duo in WPT history to reach back-to-back final tables and they did it in style—each capturing a title.

NorCal players claimed four of the six final table seats at the Shooting Star. Along with Paur and Sundar were Isaac Baron of Los Gatos, who took second place and $704,200, and San Jose’s Faraz Jaka (WPT’s Season VIII Player of the Year) who came in fifth and took home $216,320.

The WPT’s Executive Tour Director Matt Savage said of the Shooting Star: “It was once again a great success and proved once again that when you deliver a great product and plenty of satellite winners the players will come. I have said for years that the World Poker Tour Bay 101 Shooting Star has the best satellite program in poker and no other event on earth could deliver the amount of players we draw for the early satellites.”

He added, “Having Taylor Paur, who has always been known as a great online player, break through in a live WPT tournament at Bay 101 capped off a great week.”

Getting his two cents in, Bay 101 Casino’s Tournament Director Brian Gudim said, “What is very enjoyable for me at the Shooting Star every year is the weeks leading up to it. This is when a lot of our daily players start to win their $7,500 seats through a multitude of satellites that we offer. And every year, when we get down to about 30 players left in Shooting Star, there is a handful of locals still in. This becomes very exciting as you watch your locals take on these seasoned pros, with so much money on the line, battling for a seat at the final table. Eric Werner, Ron Lewis, and Ravee Mathi Sundar are three well known locals that had super deep run this year, which was a lot of fun to witness.”

Sundar started the final table as the short stack and Baron had the lead, followed by Paur, Jacob Bazeley, Sorel Mizzi, and Jaka. On the 22nd hand Sundar went all-in with ace high and was eliminated by Paur’s relatively easy call with three fives.

Thirteen hands later Jaka went all-in with 4-4 and was re-raised by Bazely with 10-10. When no help came on the board, Jaka went out in fifth place.

He also received a WPT Champions Trophy and will have his name engraved on the official WPT Champions Cup. Add to that a seat in the WPT World Championship, a Hublot Oceanographic Watch and a pair of gold Monster 24K headphones.

Many of the same people who entered the Shooting Star made the trip east to Greater Sacramento to play the WPT Rolling Thunder tournament at Thunder Valley Casino. After outlasting 702 other players to make the final table at Bay 101 Casino, Sundar and Paur did it again at Thunder Valley, this time after the elimination of 373 determined the final six.

Instead of starting with the short stack, Sundar now was second in chips only to Harrison Gimbel and followed by Paur, Rex Clinkscales, Jeff Griffiths and Jesse Rockowitz.

Right off the bat, four double ups occurred in the first five hands. Then on hand 13 Griffiths went all-in with 7-7 and was called by Paur’s K-J. A board of J-5-4-J-A knocked Griffiths out in sixth place with $50,291.

About 20 hands later Gimbel went all-in on the turn with 8h-5h with a board of Kc-4s-4h-6h. When Sundar finally came out of the tank he made the difficult call with Qh-Qd. Gimbel was left to hope for a seven or a heart and was out in fourth ($83,818) when the 9c came on the river.

Rockowitz soon doubled up, and so did Paur. The lead passed back and forth between Rockowitz and Sundar a couple of times. On hand 141 Paur went all-in with A-10 and Sundar called with A-Q. With the board showing Q-5-4-9-6 Paur was eliminated in third place. With a victory he would have been the WPT’s third back-to-back champion of Season XIII. Paur was also named the WPT California Swing champion with his Shooting Star victory and impressive follow up third place finish.

Sundar had a comfortable chip lead going into heads up play with 9,305,000 to Rockwitz’s 2,050,000. On only the fourth hand Rockowitz limped for 100,000, Sundar raised to 260,000 and Rockowitz shoved with 1,920,000. Sundar snap called with J-J and Rockwitz showed K-9. The board of 10-3-3-6-6 sent the rest of the chips Sundar’s way along with the WPT title, a seat at the WPT World Championship and a pair of Monster DNA headphones. He also gets a WPT Champions Trophy to go along with having his name engraved on the WPT Champions Cup.