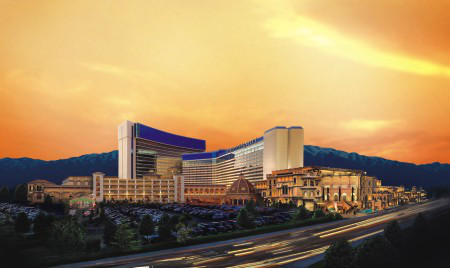 Peppermill’s Run It Up series will return in May

This past October the Peppermill Reno Poker Room joined forces with Jason Somerville of Run It Up to create an exciting fall poker tournament series. This action-packed, six-day tournament brought in $300,000 in prize money.

Given that there were many $85 buy-ins and the Main Event buy-in was only $565, this was a remarkable turnout. The excitement was high as 1,750 tournament entries were reported throughout the RIU series. In addition to the live poker action, players were treated to free events with workout clinics hosted by UFC title holder T.J. Dillashaw, a Survivor TV viewing party hosted by past champion “Boston Rob” and a night out at EDGE Nightclub.

The RIU event culminated with a live stream of RIU’s final table with commentary by Jason Somerville himself. Tens of thousands of viewers watched via Somerville’s Twitch.tv channel, making this high-definition quality of live streaming a refreshing take on what the future holds for poker broadcasting.

The Peppermill team ended the night with a surprise Thanksgiving Day feast, thanking the players for their continued loyal support.

On Dec. 17, the Peppermill Poker Room hosted a year-ending holiday party that boasted $10,000 in random seat drawings, a great way for players to engage in the exciting live games. The evening ended with a lasagna dinner where players received embroidered Peppermill Poker jackets as splash pot prizes.

What does 2016 hold for the Peppermill Poker Room? The New Year kicks off with a Winter Poker Bonus Comp program, allowing players to earn up to $2.50 per hour through the end of April. Peppermill Poker Room’s annual Big Game party promises poker, food, fun and much more on February 7 for the Super Bowl, including football squares worth hundreds and free drawings worth thousands. The Sixth Annual Nevada State Ladies Poker Championship will be held March 17 to 20, featuring a powerful lineup of Hall of Fame poker stars.

The Peppermill is also excited to announce that Jason Somerville will be returning May 24 to 30 to host a new Run it Up tournament. This tournament series will once again draw poker players on an international level, while continuing to focus on unique events and player-friendly gaming. Schedules and structures are soon to follow and will be posted at PeppermillReno.com.