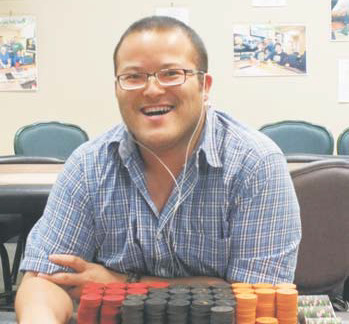 On Aug. 17 the Lucky Derby Casino hosted their annual tournament in honor of The Cardroom’s Player of the Year. Making a repeat appearance was two-time POY Rellie Sigua, only this time the bounty on his head was a hefty $500.

Claiming the first place prize money of $1,750 was Darryl Pham of Citrus Heights who has worked at the Derby as a prop for about three years. After his win he said, “This is a great casino and everyone should come by and check it out. There’s great action and good tournaments and great food.”

He also said he was looking forward to the POY tournament because, “I kind of know Rellie. I used to play with him at Lucky Chances back in the day.”

Lucky Derby manager Kirk Schayltz said after the tournament, “We had a great turnout for the event. Big thanks to Randall Rapp and The Cardroom newspaper for allowing us to host this great event. Special thanks to Rellie Sigua for making the commute and attending. Thanks to all who donated school supplies as we were able to donate a big truckload to the local Citrus Heights school district. We are looking forward to hosting next year’s event. Until then, see you on the felt and don’t let ’em bluff you.”

When asked his impression of the Player of the Year he said, “He’s a great guy. He was real gracious about it. I got to talk to him about the hand afterward. I played with him a couple times earlier in this tournament and he plays really well. He’s really solid. He made a lot of good moves. I have a lot of respect for his game.”

Sigua’s take on what happened leading up to his elimination was, “I’d just gotten hit from a previous pot. Ace-queen against pocket fives. He outflopped me with a five, there. I lost about maybe 40 percent of my stack. A few hands later, everyone folds to the button. I kind of knew he was going to be raising light from the button, but I wasn’t expecting for him to have that particular hand, A-9, which is not very light, being on the button. He raised 2x and the small blind folded. I had K-10 off-suit. Only thing could beat me here is probably an ace or a bigger king, which he can’t call me with for pretty much his whole stack. I raised him all-in for pretty much 95 percent of his stack to get him to go in the tank for awhile. I guess the $500 bounty’s what got him to call.”

He also says he’s looking forward to coming back to the Lucky Derby again next year, as he has every intention of taking the title for a third consecutive year. “This year, since people are giving me competition, I think it’s going to be fun for me to try to really take first right now. I’m going to go pull for first on this again. Three in a row, yes. I’m almost going to bank on it right now. I’m going to take first again this year. There’s no guarantees, but it’s very sure that I take first again this year because I’m actually working at it. In the beginning I was playing it very light. I wasn’t really focused on tourneys, more on the cash games. But now I’m going to want to try to get it back in there because we have some Bay 101 players that are in it good.”