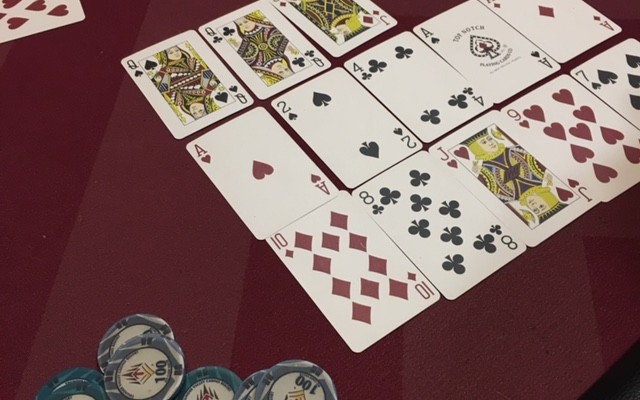 Kyle KitagawaMar 06, 2016Guest BloggerComments Off on Pineapple Open Face Chinese is THE BEST

Last month I only played two tournaments.  Neither of them were Holdem’ events.  I’m so bored with Holdem’ right now that I can’t even focus for 30 minutes while playing it.  It’s still an awesome game and all, but there is so much more adrenaline rush playing other forms of poker.  Keep in mind that my entire poker career has been only holdem up until this point.  I have never even played PLO for real money yet (I know, you’re shocked).  I probably should get on the PLO bandwagon, but I can’t right now because I’m addicted to Pineapple Open Face Chinese (POFC) poker right now, especially the 2-7 middle version.  Speaking of 2-7, I’m also really getting into 2-7 Triple Draw which is why I flew down to L.A. last month to play the LAPC 2-7 Triple Draw event hosted by the Commerce and tournament director Jeffrey King, who held a really fun event.  This was officially my first time ever playing Triple Draw for real money (cash or tournament), so of course I didn’t make the money, but I can say that I finished in the top 20 out of 53 and made it past the dinner break! I plan to play at least 1 or 2 Triple Draw events this summer at the WSOP.

Anyways, back to POFC… it’s like … the best.  You can play either heads up or three handed.  In regular POFC, the goal is to set 3 hands total (two 5 card hands, and one 3 card hand) on top.  The top 3 card hand (top) cannot be stronger than the middle row (5 card hand), and the middle cannot be stronger than the bottom row, or else you FOUL your hand.  Each player starts with five cards which they can set anywhere they want (top, middle, or bottom row), but once the cards are placed they cannot be moved!  Next, each player draws three cards and is allowed to play only two while mucking the third.  There are a total of four draws.  The tricky part is determining the score after each hand.  There is a point system, and I’m not about to explain it.  Google it. In the 2-7 version, the top row cannot be stronger than the bottom row, and the middle row has to be 10 high or worse (no flushes, no straights, no pairs, Aces are high).  in both versions of the game, your goal is to make Fantasy Land.  In the normal version, QQ or better on top qualifies, and in 2-7 KK on top or better qualifies as well as 2,3,4,5,7 in the middle.  Fantasy Land???  It sounds stupid…no, there are no unicorns or anything, but you get 14 cards (muck one) ALL AT ONCE for the next hand instead of drawing.  THAT’S FRICKIN’ HUGE!

Go Google the rules and points system.  I’m too lazy to explain it plus it will bore the people that already know it.

So ANYWAYS… back to my POFC story… wait, was I even telling a story?  I think my main point of this entry was to say how awesome POFC is and that it is “the best.”  And, you probably guessed it, the second tournament that I played last month was a POFC event held at Thunder Valley and directed by Ben Erwin (another cool TD guy that isn’t afraid to host these weird and newly popular forms of poker).  BY THE WAY, this tournament was also hosted by DEEG Poker.  Word on the street is that they are close to announcing some big deals and a new line of sick hoodies that I’ll probably be sporting at the WSOP this summer inside the -10 degrees Pavilion at the Rio!  I ended up being the bubble boy in that tournament, but it was still extremely fun and I’d probably play it again even knowing that I was going to be the bubble boy simply because it’s F*^%ING FUN!  iphone users, you can play the game on the “Pineapple” app.