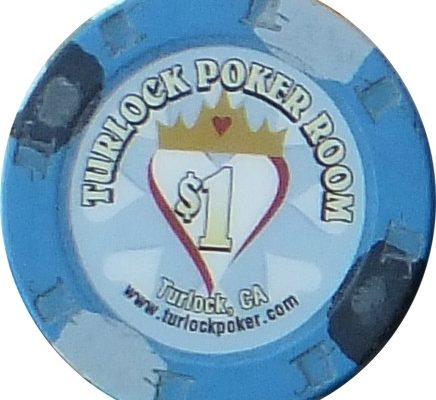 I was fortunate enough to make it to the Turlock Poker Room for the Main Event of their Semi-annual Championship Series in November. Checking in for the start of Day 1B, I had great hopes for a deep run in this excellent and well-run tournament.

There were about 90 entries on Day 1A, and with all the alternates (and with re-entries permitted) it looked like they would reach about the same number again. In fact, they wound up with 175 entries at $550 apiece, so the total prize pool was nearly $85,000.

Starting out, I stole a few small pots and had the goods on a few big ones. I got short stacked but battled through it to recover. As the final level of the day wound down, I realized I was sitting on an above-average stack. I felt pretty good about it but knew that the real work would come the next day when only about a third of the remaining players would make the money.

In the morning as we unbagged and stacked our chips I was feeling good, especially when I saw a few short stacks at my table, and many more at the others. Of course, there were just as many monster stacks that could prove problematic.

We were only about 10 hands into Day 2 when the pivotal moment came. A player in middle position had raised to 2X, all others folded to me in the small blind. I looked down at K-K and made it 6X. The player on my left had been playing extremely loose the day before, with a stack that wildly fluctuated up and down depending on the current level of his luck factor. Currently he had about two-thirds as many chips as I did.

I wasn’t surprised when he called—he had done so in similar situations with relatively weak hands. The initial raiser folded. The flop was 2-3-4 rainbow. I’m not crazy about this flop, but there are really only four hands to worry about—the three set possibilities and A-5. Do you call a 6X bet from the big blind with one of those hands?

I bet about 60 percent pot and he called. The turn was another deuce. That didn’t really change anything so I looked at my options. I could go all-in knowing he might call with one of his weaker holdings (which he had done before). I could check, then call when he goes all-in, which is basically the same thing only without the added benefit of him possibly folding. Or I could check and fold and I couldn’t see that happening.

I went with option 1 and he quickly called, turning over A-5. I’m still shaking my head over that pre-flop call, but maybe I’m wrong. Read it wrong, played it wrong, thought about it wrong. Wrong, wrong, wrong!

Or he just got super lucky and that’s part of the game.

All I could do is let it go and get to work on my short stack. Unfortunately, I only lasted about another hour before blinds, antes, and bad hands caught up with me. I did last a lot longer than that guy on my left. He was gone about 12 hands later when he shove-called with second pair!