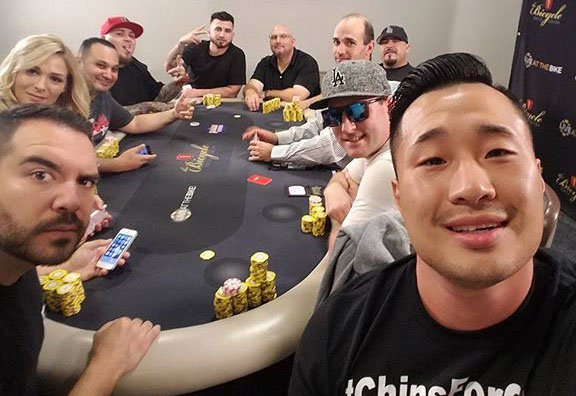 Poker and friends at the Instagram Special Part II 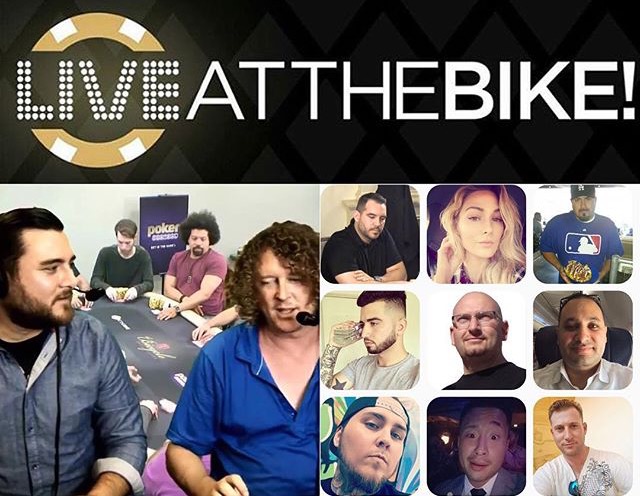 Live at The Bike started nearly 10 years ago as a revolutionary and very forward-thinking poker platform that later added a live stream. They were the first casino to do so and, in my opinion, really created the poker streaming space which paved the way for apps like Twitch to really take shape and propel poker even further into today’s mainstream.

For years they have had professional analysis of live hands being played and have discussed everything from live and verbal tells, to bet size ranges, SPR (stack to pot ratios) and much, much more. It’s safe to say I love the stream and watch it often and you should too. Go to www.liveatthebike.com and you can watch live streams for free Tuesday to Thursday and poker training goes on weekly as well.

By now everyone knows what Instagram is (known as the Gram, IG, or Insta in most cases now). If you don’t, then climb out from under the rock you’re hiding under and download it. It allows you to share your life story in picture form and now in the “Instagram stories format” (a power play by Zuckerburg since he couldn’t buy Snapchat so he said the hell with you and built his own into IG ). 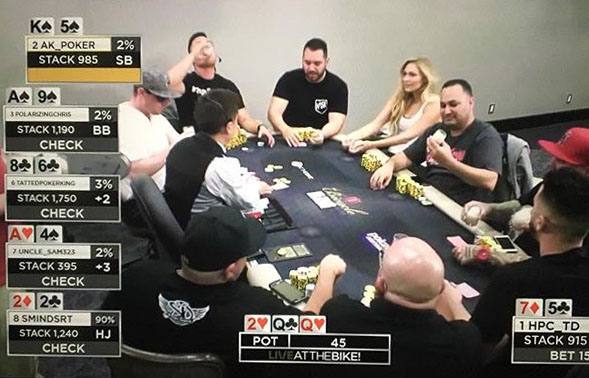 A bunch of us poker players got together back before April and organized the first ever Instagram Special on Live at The Bike, which was a blast. Those of you who follow me or the other original nine players (see my fellow blogger Kyle Kitagawa’s post here on the website) know how it went. It was awesome to play against them and all of you who follow us on Instagram got to really see that we’re not only people who post pictures of “chip porn” but we’re poker players who take our game of choice seriously and love it enough to put ourselves out there for analysis and ridicule. (The Twitch chat is like a live butcher room. Read it if you want a great laugh and want to scare people in your house when you burst into laughter as you see the chat convos.)

But we had fun and learned a lot. I reviewed my video multiple times and learned a lot about my playing style (and physical tells) and it helped me a ton. I believe a new era of Live at The Bike started. Before this The Bike didn’t post much on Instagram, but after the first episode aired they saw the power of Instagram to propel the stream into new areas and The Bike realized they could promote their platform on Instagram, so they started posting like crazy and it’s been nonstop promoting ever since.

So just like they did when they first pioneered all of this, they again saw the opportunity for growth and welcomed and embraced us IG poker players and our special show whenever we wanted. We do the planning and they block the schedule for us. How cool is that? Follow @liveatthebike for stream times and specifics.

Not too long after that our master orchestrator Brian @bripoker (these are their Instagram handles) and a ton of other poker players got together and planned the Instagram Special Part II which starred Brian as the main commentator, with two other guest commentators. Having him commentate was awesome because he knew a lot of our back stories and the intros were more in depth and people got to know us more. Brian and I spoke after the show and he said, “So many people have asked the other commentators how to get on the show,” which was huge! We knew we created something special and I believe all of us knew it along with The Bike.

He also said, “Having played on 10+ Live at The Bike streams, none of them have the feel of an Instagram show … when it’s an IG special, the party is in town.”

The return players included: Stuart (@smindsrt) a great guy, intelligent player and mellow fellow whose table presence is intimidating while relaxed all at once (don’t read more into it lol). Myself (@pokeragent) a shenanigans wizard and poker player extraordinaire that has 18 years under his belt and can play many different variants of poker including Omaha, Stud, PLO and Chinese just to name a few. I love to talk it up at the table (my shameless plug ), Corey (@hpc_td) a highly-focused, silent-but-deadly no-limit and PLO killer and also tourney director at Hollywood Park Casino, and finally, last but not least, Oscar (@oscarmeyerbeanr) the LATB veteran, poker pro and Blackjack genius who once ran up $500 to $14,000 quicker than I can ever imagine. (It’s in his IG feed folks and the video of his win is bananas.)

New IG players included Andrew (@uncle_sam323), a local grinder and party king. His exploits make him our very own mini Dan Bilzerian and believe me, he knows how to have fun. Allen (@ak_poker), who drove from Vegas to play with us and is a Vegas pro who also coaches. He also is collecting funds for his sister who’s in need of our help, so make sure to give his page a follow and consider his cause #chipsforchris. He’s an awesome guy and funny as hell to play with on the tables.

Next is Courtney (@liberalchick) who is energetic, amazingly funny, quirky and … um … yes, quirky … to say the least. Playing with her was fun as hell and I’ll never forget it. She’s great to talk to as well and carries a great conversation! She also is “the blonde assasin” because while she was distracting us she was taking our money at the same time! She was also the first lady of our IG special.

Next is Charlie (@tattedpokerking) aka huge time, aka big sexy (okay, okay, I made that one up, but it’s awesome for him), aka a bunch of other nicknames. He had an intimidating look and playing style and wasn’t afraid to call off his stack, so you had to watch out for him because the bluffs were hard to get through the whole time. He consistently rounds the LA poker scene. Last but not least is Chris (@polarizingchris) who was by far one of the funniest and most down to earth guys I’ve met in some time. He’s a great poker player whose fearless nature at the table makes for a tough day when playing against him. He’s not afraid to mix it up with you and challenge your line as he did with mine when he river bluffed me with the same hand I was holding (KJ off). He’s a great guy and he’s funny as hell–five minutes with him and you’ll laugh your shirt off! We originally had Travis (@teh702) flying in from Vegas to join us, but sadly last minute things came up so he had to cancel. Be sure to catch him in our next IG special as I know he won’t be missing it.

With that our lineup was set. We decided to keep our tradition of going to dinner at The Bike and play credit card roulette. Chris was the lucky winner this time and picked up the tab (thanks Chris). Then we headed into battle! One thing you’ll notice is that the Instagram Special games are just so much more fun and also mixed in with some excellent poker playing so you always get some entertainment and this second show was no different.

Before the stream got going I lost a huge pot to @tattedpokerking when my semi-bluff got called by his straight and bricked out so I was in for $2k by the time the stream started and had lots of digging out to do. We started the live stream off with a bomb pot (a pot where we all put $25 in blind, then run out all five cards. We all turn over our hands and one lucky winner usually scoops the pot). It’s a hell of a way to get the game going. Instastuck for eight players lol.

Throughout the stream there were a few dealer changes so we also did bomb pots playing PLO (Pot Limit Omaha Hi) which was a fun way to mix it up for the stream. Then keeping with tradition, we also played the 7-2 game. Now if you haven’t played 7-2 at your home game and want to create crazy action you can thank me later for that suggestion!

Basically if you win a hand with 7-2 then each player pays you $25 (or whatever you agree to beforehand). It’s a hell of an incentive to win a pot, but can cost you huge if you get caught, lol! Makes for a hell of a sweat and does a total Jedi mind trick on you during hands. 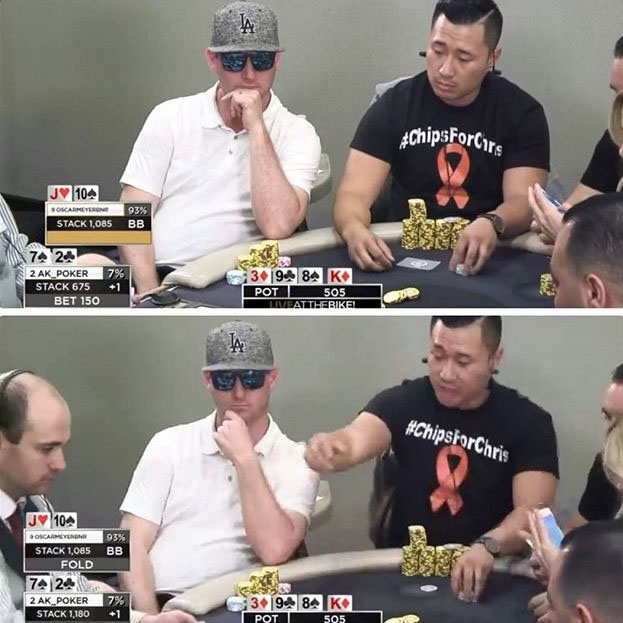 With all of that set we played two hours of some of the most entertaining live steam poker you’ll find and I have to say some of the most fun I’ve personally ever had at a poker table. Even the main commentator, Abe Limon, bought a round of shots for the players which loosened up the game a little.

@liberchick was working hard at distractions and @smindsrt was busy three-betting me all night . All in all we had a blast, and when we were done we all hung around and spoke for a little while.  When I was leaving I couldn’t help thinking we really started something special here. I hope we can all continue to do it on a regular basis with more Instagram poker players and more IG specials. The IG poker era of #chipporn #pokerlife and #wifsuwo is here (three of the most popular poker hashtags on Instagram) and it’s here to stay. I for one am glad to be a part of it!

Be sure to catch us on our next LATB IG special which I know you’ll all find out about soon enough on IG because we promote the hell out of it.

Also big thanks to The Cardroom for inviting me to blog. Here’s to great blogs to come! Cheers!

Previous PostEverett Coast Next PostIf you don’t like the options, raise!