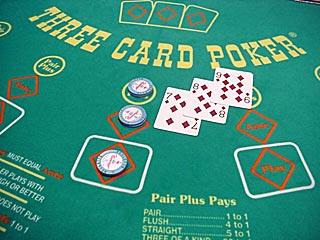 More than poker at local cardrooms!

Your local cardroom/casino has much more to offer than Texas Hold’em and other poker variants. Some of the most popular games at these establishments are blackjack, baccarat, pai gow and Three Card Poker.

While not identical to their Nevada/Indian casino counterparts, the games often have more variations of bonus bet options and other special payouts.

The biggest difference is that you won’t be playing against the house. Players take turns acting as the banker for betting purposes while the casino is paid a fee for each hand dealt. (For the sake of clarity, we’ll refer to the “banker” as the player acting as such on a given hand, and the “casino” as the facility where the game is being played.)

In the old days every player had to pay their own fee for each hand they received, creating an extra hurdle to overcome. Today, most municipalities in California allow for the banker to pay the entire fee, improving the odds for the player.

While you’ll get a turn to act as the banker, it isn’t mandatory, and most people pass on it. Instead the banking duties are handled by the man or woman sitting in the corner with mountains of chips. They are often referred to as “the corporation.”

The corporation, which is a separate business entity from the casino, handles banker duties at the table. When you win, it’s the corporation that pays you off and when you lose, they are the ones receiving your chips. (Unless, of course, one of the players has decided to take their turn as the banker.)

There are many variations of these games, each with their own rules, options and bonus bets.

For example, Spanish 21 uses a deck with no 10s and offers multiple opportunities to split, double down and surrender.

EZ Baccarat plays the same way as regular baccarat except it eliminates the odds differential between Player Line and Dealer Line wagers and replaces it by “barring” one specific winning Bank hand (the winning Bank hand consisting of three cards and totaling seven points will push). The appearance of this hand is called the “Dragon 7.” Customers can make an insurance bet—the Dragon 7 bet—which pays 40 to 1 when the three-card winning Bank hand totaling 7 points occurs.

So the next time you’re waiting for your name to be called in the no-limit game or you just want to have some fun at the casino, give these games a try. You’ll have a great time and the payouts can be big!