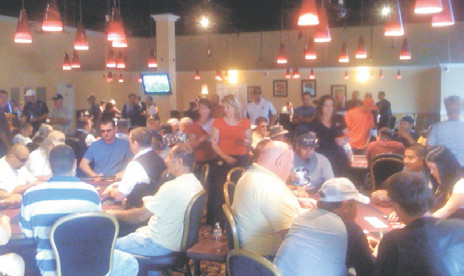 What began as “The Biggest Little Card Room in California” with merely four tables and nine employees is now celebrating its 10 Year Anniversary as a premier gaming destination in the Central Valley.

When Turlock Poker Room & Casino’s co-owners Joe Fernandez and Philip Rheinschild opened the doors in June of 2004 in a 2,000 square foot building, they were confident that what most outsiders would have called a hole in the wall would in time develop into a premier gaming destination. A reputation was quickly established as a place where beginners, intermediates and professionals would feel welcome and comfortable small-town feel with big-time action.

“Over the past decade the Turlock Poker Room & Casino has earned a reputation that compares to the top gaming destinations throughout California and Nevada,” said Mario Alvarez, director of casino relations. “The owners’ progressive vision, hands-on approach, and commitment to community have been the catalysts of our growth and success.”

To mark this special occasion with an exclamation point, TPR is holding a 10 Year Anniversary Series of tournaments from Oct. 3 to 12. The big finale will be the Main Event Oct. 10 to 12 with a buy-in of $1,100.

Mega satellites with $125 buy-ins are being held each Sunday, including one on Saturday, Oct. 4. (There are several other ways to get a Main Event seat—go to www.turlockpokerroom.com or call 209-668-1010 for more information.)

In a recent interview Rheinschild said, “We feel honored and privileged that not only is Turlock Poker Room & Casino recognized as Central California’s premier gaming destination, but equally as important, a contributor to the employment of 120-plus employees and a major factor to the growth of Turlock’s economy.”

Fernandez echoed this sentiment adding, “I’m most proud of being able to give employment to our 120-plus employees. Knowing I’m contributing financially to them and their families; that’s a great feeling.”

Since opening, Turlock Poker Room & Casino has had a direct economic impact of over $50 million, has supported many charities and community organizations, and has contributed nearly $250,000 in sponsorships and donations over the past 10 years.

Turlock Poker Room & Casino is also the major sponsor of the only professional sports team in Turlock, The Turlock Express of the Major Arena Soccer League, and has recently committed to another year of sponsorship.

Some highlights from the past 10 years include:

Turlock Poker Room & Casino continues to grow, while staying true to its roots. Today, TPR offers a variety of live action poker games including limit and no-limit Texas Hold’em, Omaha, and Mexican Poker. TPR still offers affordable Texas Hold’em tournaments twice daily at 10:00 a.m. and 6:00 p.m. and is proud to host many of the same players and employees as they did on day one, 10 years ago.