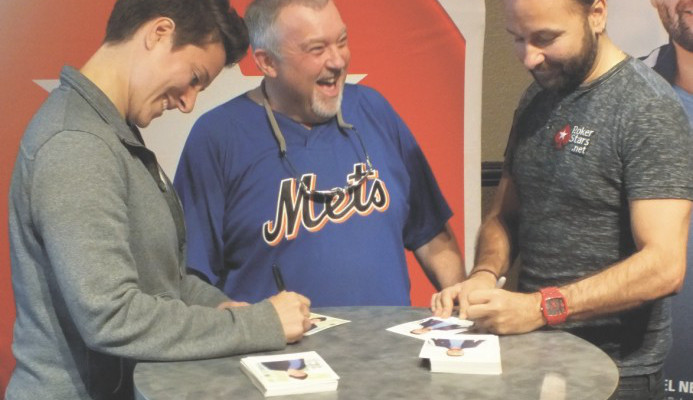 July and August had the poker stars from PokerStars visiting casinos and put­ting on special events in California to promote Californians for Responsible iPoker (www.californians4ipoker.com). They made many stops, including Napa Valley Casino, Lucky Chances Casino, The 500 Club Casino, and Turlock Poker Room & Casino (which is where I caught up with them).

Daniel Negreanu and Vanessa Selbst were the stars in action on this day as they rotated appearances with Chris Moneymaker, Jason Somerville, and others. I asked Daniel and Vanessa what brought them to NorCal and Vanessa laid out the basics: “We’re here to get the word out about Californians for iPoker.com, which is a coalition to help get the word out that we want regulated online poker. We want a safe place to play poker online. We want regulators to realize that that’s what everybody wants and to make it a reality.”

It sounded good to me, but they were preaching to the choir. I wondered if any progress was actually being made. “There’s definitely progress. We’ve made many stops up until now. We’ve been all over the region, and we’ve basically got a lot of people that are inspired about it, signed up about it,” Daniel said. “I’ve been to Sacramento myself to talk to a lot of politicians and they’re starting to get it. Really it comes down to education and awareness, and once we have that it’s really a no-brainer that it’s great for the state because of the great revenue stream that can fund a lot of programs that a lot of people in this state desperately want.”

Yeah … they always try to sell the politicians with the old “do it for the kids” argument. Whether or not they tax and regulate it and no matter what the politicians spend the money on is beside the point. The real home run came from Daniel when he said, “I know people in this state and all over the country want to play online poker in their underwear and there’s no real good reason why they shouldn’t be allowed.”

Lee Jones was also there, coordinating things for Poker­Stars, so I asked him why they took this project on. “We’re obviously the biggest poker operator in the world, and we are the ones who really have the celebrity muscle such as Daniel, Vanessa and Jason Somerville, Chris Moneymaker, those people. We have the organization, so we’re the one driving the bus, as it were.”

The longer answer, which he then tacked on was: “The message that we want to get across to the people of California, to the Legislators of California, is that people in California are playing online poker, okay. They are. To give you an example, a site called Lockpoker went out of business in April, took $11 million of player deposits with it. If California tends to run 30, 35 percent of the American poker market, well figure 30, 35 percent out of $11 million was California money. The point is that, I hesitate to bring in the prohibition analogy, but … there it is. It’s the prohibition analogy, and we saw how well that did at preventing people from drinking gin. People are going to play online poker because it’s easier to play poker on the Internet than it is to make bathtub gin. They’re going to play online poker, and it’s only a question of whether they’re playing it in a regulated, secure environment that protects their money, protects the quality of their games, and brings revenue to the state, or not.”

So what if they’re probably the ones with the most to gain financially if the government sees fit to treat us like adults and let us play online poker in our underwear or otherwise. Just because Poker­Stars is out to promote their own business, it doesn’t mean they’re not right!