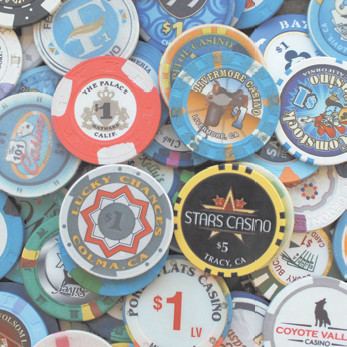 Fresh off the first night of a poker ambassador weekend, Mrs. A and I woke up the next morning in our Tracy hotel room with no reason to think anything was amiss. Then we turned on the news.

This was the morning of the 6.0 earthquake that shook Napa and the surrounding area. There were people in Tracy who said they felt it, but we were far enough away that it wasn’t enough to wake either one of us from the sleep of the just.

After hearing about the damage done in Napa, we were concerned for the people in the area and distraught to see all that wonderful wine painting many a floor red. After checking in with our casino friends in the vicinity—notably Napa Valley Casino in American Canyon (near the epicenter) and The 101 Casino in Petaluma (not that far away either, as earthquakes measure mileage)—we were pleased to hear that they had not received any damage and were proceeding with business as usual.

Maybe I should have taken it as an omen though, because this one would—at least poker wise—go down as the worst ambassador weekend ever. At every stop we were well received, had a good time, and lost in the tournaments and cash games.

At least we had a nice visit with our son and were able to hit a few wineries in Livermore to make up for our lack of poker success.

Our first stop was in Tracy at the (relatively) new Stars Casino. If the last time you played poker in Tracy was at the Comstock Casino you really should check out their new location. It’s bigger, brighter, and much more inviting, plus it’s right near the freeway and Tracy Blvd. We got there in time for the Saturday tournament at 2:30. (FYI: This tournament is now held at 10:30 a.m.) It had a $45 buy-in and a $1,500 guarantee, plus a very player-friendly structure. Not friendly enough for me, apparently. Oh, I chipped up pretty well on a couple of hands and at one point was the table’s chip leader, but then came a tough beat followed by a bluff-catcher against a guy that wasn’t bluffing.

Once I was short on chips it was the usual shove-at-the-first-chance situation. I did and the cards didn’t. I was out of the tournament and rooting for Mrs. A who seemed to be doing quite well. I played Three Card Poker (and actually won $40—another highlight of the weekend) while seeing if she could pull it off. Nope.

She went out just shy of the final table but as usual she outlasted me—for whatever that’s worth. I came back later hoping to get a seat in their $2/4 no-limit game, but they were full up and my time was limited so I had to take a rain check. Too bad, because it looked like a pretty good game!

We made it to Hayward for The Palace’s Sunday morning tournament bright and early. The key in their tournament is to stay alive until the break so you can take advantage of the high-value add-on. I gave it my best, but neither the deck nor my decisions were working for me.

When I went all-in with two pair things were looking good, at least until the river came and filled my opponent’s inside straight draw. I thought about taking advantage of the option to re-enter, but decided to play in their $4/8 game while Mrs. A once again continued the tournament without me.

The last several times I went to The Palace and played $4/8 the game was wild and loose with lots of big pots and I managed to take more than my share of them. This time it was tighter (although still pretty loose by most standards) and my streak of bad breaks continued.

After getting down a couple of racks I took one last shot and managed to turn things around a bit. When Mrs. A was out of the tournament, once again just missing the final table, I was only down about a rack which almost felt like winning.

With a thought towards getting ‘em next time we headed back east.

After stopping at several local wineries we made it to the Livermore Casino in plenty of time to enter their 7:00 p.m. tournament and sit down for dinner. I had the baked chicken and Mrs. A had the bleu cheese burger, both of which were delicious.

We were early enough to take our time and enjoy the meal before heading to the tables to do battle. What can I say? Mediocre cards, tough beats, then a break to gain a big stack only to watch it drift away once again … blah, blah blah. This was getting redundant, especially when I once again found myself on the rail despite my best efforts.

Mrs. A was still plugging away (of course) and I was playing Three Card Poker again and waiting for a seat in their $4/8 game. Once again Three Card was the only thing going right and I was ahead $80 when they called me for $4/8. I guess I should have stayed where I was!

I was getting lousy cards, which meant the losses were coming slowly. I think I won at least a pot or two before Mrs. A was knocked out, again just before the final table, and we called it a night.

We spent the night in South San Francisco to get over to Lucky Chances Casino in plenty of time for the 9:30 a.m. tournament. On Monday mornings they have a $65 buy-in with one $50 re-buy/add-on and a $3,500 guarantee for first place. One nice, deep run here and it would more than make up for the past couple days.

While waiting for the starting time I had the chance to talk with some of the floor staff and patrons about former tournament director Bob Bloom who passed away recently. To a man, everyone had nothing but great things to say about him, myself no less than anyone else. Clearly he is—and will continue to be—sorely missed.

I really felt like this time the tournament would be different as I experienced the usual ups and downs of the early stages. I acquired a decent amount of chips after having to use my re-buy option, and felt like I might be on my way. Then there was the guy in seat three. I had A-Q and he a pair of tens when he went all-in for about a third of my stack and I lost the coin flip. Then I lost another flip to someone else and before I knew it I was all-in against seat three. With my pocket tens to his overcards of A-J I managed to lose the coin flip again. If you can’t win at least your share of the flips you’ll never win the tournament. If you can’t win any at all, you’ll be going home soon. Which is exactly what happened. While I was waiting for a $6/12 seat Mrs.

A came to find me with her own tough luck story. We left, thinking at least it’s better than being at ground zero of a big earthquake … I guess.