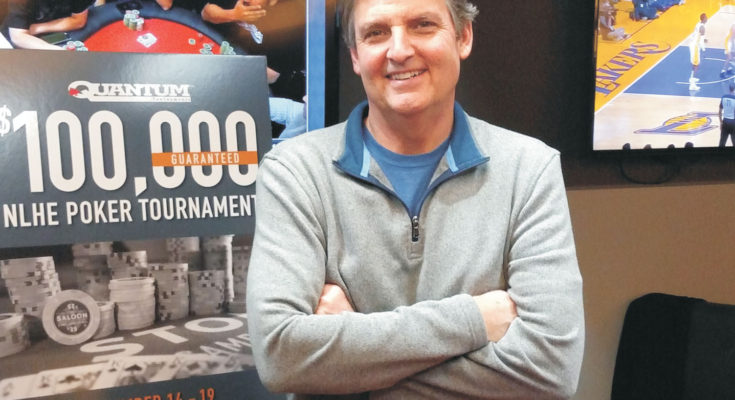 NorCal’s first-ever Quan­tum tournament was held in November at Stones Gambling Hall in Citrus Heights. This unique format and structure had a week’s worth of entry days and different buy-in amounts, plus various ways to get in the money.

Kevin Pound, the CEO of Quantum Tournaments, said it is a structure that has been around since 2011. It was started at the Bicycle Casino by tournament director Mo Fathipour who had it patented, then partnered with Pound in 2016 to take it to other casinos.

Stones had five Day 1 flights at $120. Players started with 10,000 chips and 10 percent of the field advanced to Day 2. Then they held two $240 Day 1s where players began with 20,000 chips and 20 percent advanced. Advancing players all received a $250 payout at the end of their Day 1. Those who qualified more than once received an additional $900 for each stack removed from play.

“It allows a smaller buy-in player to compete for a larger prize,” said Pound. “Stones had great results. They have limited space, so on their peak days, when they knew they would have a lot of (cash game) players, they were able, to have early morning flights. Therefore, it ­doesn’t take up the space of the cardroom. So the great thing about Quantum is it allows a smaller cardroom to facilitate a larger buy-in tournament.”

Day 2 ran late into the wee hours of Nov. 19, with the final table broadcast at Stones Live Poker on Twitch.tv with Michael Loncar and Lon McEachern, the voice of the World Series of Poker, providing commentary.

“We are incredibly excited and honored to have been Quantum’s first Northern California stop,” said Stones tournament director Justin Kuraitis. “The tournament was a huge success, bringing in 904 total entries. Aside from the massive value of being able to play in a $100,000 guaranteed tournament for as little as $120, I think that the Quantum is so appealing because it accommodates every different type of player’s bankroll. The ability to cash out bonus payouts during Day 1 play encourages multi-firing and the prize pool gets huge quick. Combine that with an excellent structure and Lon McEachern handling the commentary for a Stones Live final table, and the Quantum was guaranteed to be a hit. I am looking forward to having the Quantum back at Stones sometime soon!”

Before the final table began, we had a chance to chat with McEachern about his role at Stones as well as the World Series of Poker and ESPN.

The Cardroom: How did you come to be working with Stones?

McEachern: When I first moved to this area, about four-and-a-half years ago, I looked for an opportunity like this. Stones was just about to open up at that point. I didn’t know anything about it, I didn’t know the people, or what the history was or anything, but I had seen the room, and talked to the people, and it was all lining up exactly how I wanted it. Not too far from home.

We ended up meeting and talking. They were looking for somebody to fulfill this role and raise the profile of Stones and use whatever knowledge I had of poker and how to market it, and social media, and the people who knew me, to draw them here.

It really worked well. The Stones family is really a wonderful family. They care about their people. Not only the workers, but the players that come in. It’s been a great fit.

One of the main things you do is the Stones Live. Is that right?

No. This is kind of rare. Early on, I had a roadblock with ESPN. I couldn’t do any other announcing anywhere else. So, the situation with ESPN is changing, and they’ve become a little more lax on that, and they understand what this is about. They don’t have a problem with it, but still, my role is mostly to be here a few times a week, play tournaments, play some cash if I want, whatever. Then let people know when I’m going to be here, and talk about the tournaments here and there, and wear the gear and be the evangelist.

How do you like doing the Stones Live stuff though?

It’s fun. It’s certainly different from the ESPN stuff, even the streaming stuff we did this summer at PokerGO, and we’ll do next summer. Different vibe, and you work with somebody different. Probably each time I’m in there, I work with somebody different, and so I get to know them better. I’m working with Michael Loncar tonight. We’ve been wanting to work together for a while, so we get our chance to do that. He wanted to do it because it’s Lon and Loncar. It’s fun and it’s great, since I play here, to be able to see how the players who I’m going to be playing against or have played against play the game. It’s nice. They bank those, you can go on YouTube and see the old shows and see how you played if you happened to be on the screen. It’s a great benefit to your training.

What is your take on the Quantum structure?

I gotta hand it to Justin, the tournament director here, you can always count on him to do something new. It’s not just him, it’s backed up by the management group and the owners here at Stones. He’s constantly trying something new.

Having multiple Day 1s with the different buy-ins piqued a lot of people’s interest because they’re partially guaranteed and people really responded to it. One thing I have learned from being here in this area that this Sacramento poker market is very strong. People know what they want, they know quality when they see it. That’s why these tables here at Stones are filled all the time pretty much.

During this year’s WSOP broadcast you got a Stones reference in.

Yeah. When Norman [Chad] was here to help get more people involved in the live stream, we had a contest to come up with another word for “Wamboozled.” I think it was “Jillywonkers.” I don’t know how many responses we got (on the live stream), but Norman just chose one and we contacted the guys to tell them that we were going to mention it on the air.

He liked Stones. They spread Omaha here, which is his game. I don’t think he had a chance to play much though, because the final table that he was going to be commentating on it started very late, so they were here very late.

We certainly hope you guys are going to be around ESPN for a while.

I would assume, but our contract is up in a month and it’s switching this year. Poker Central is taking over everything. They do PokerGo and ESPN Poker and other stuff too. ESPN has been budget cutting. They just don’t have the subscribers. The way that TV is being watched is different than it used to be.

Anyway, all departments need to cut budget and so there was this deal between ESPN and the World Series and Poker Productions, the production company that produces the shows, and Poker Central. Poker Central agreed to take over the whole budget and ESPN still gets their shout-out. We’re just having to negotiate with Poker Central. I anticipate that we’ll be around.