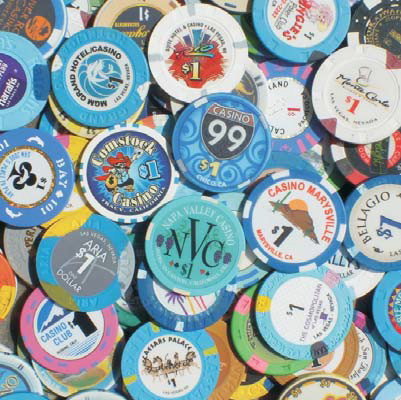 Last year I had such a great time playing in the WSOP Seniors Event that I thought I’d give it a try again this year. I had no big expectations of improving upon 153rd out of 4,128, but figured if I played patiently and smart I could at least make a good showing.

When I started Day 2 ninth in chips I had to make myself remember not to go crazy and start spewing chips. Unfortunately, being card dead for most of the day helped prevent that from happening. I had my ups and downs, but managed to hold fairly steady for most of a long second day.

After promising myself I wouldn’t go out with complete crap I kept folding my rags and watching more and more players get eliminated. What I really wanted was a good opportunity to take my chances and double up, but my cards kept coming up garbage.

Finally I was in middle position and shoved my last 10 blinds with Q-J suited (which looked huge after two hours of nothing) and was called by pocket 4s. It was just about a best case scenario, only the board didn’t cooperate and I was out in 42nd (out of 4,407).

Maybe next year. By my calculations, if I can continue this trajectory, I’m a lock for the final table!

Before heading to Las Vegas though, I had a great weekend here in Northern California visiting a couple of “new” cardrooms and a couple of old favorites.

The Comstock Casino in Tracy has a new location and name: Stars Casino. Their new digs are just off the 205 freeway near Tracy Blvd., a much larger and more convenient space than their previous site.

In addition to poker, they are also offering Blackjack, Pai Gow, Baccarat, and Three Card Poker. All of them seemed to be doing plenty of business.

I was fortunate to be there on the night of their first ever tournament at the new place, as they were holding the Stars Casino Customer Appreciation Tourney. This no-limit Hold’em event had a $25 buy-in and they were guaranteeing a prize pool of $2,500. They had six tournament tables going, so they were going to need quite a few alternates and re-entries if they were to make their guarantee. In the end they came very close, with a total of 96 buy-ins.

The initial 50 seats they had available were sold out more than an hour before they began, but I was high on the alternate list and got a seat when they opened another table. I noticed that there was some reckless play going on so I decided to wait for an opportunity to take advantage of it. In a four-way pot I flopped a pair of kings with a jack kicker and was sure that the guy who bet out had an inferior hand. I went over the top of his overbet, confident I had him beat, only to be called by the lady between us who I had thought would fold. Oops.

The initial bettor folded (I knew I had him!) and the lady showed K-Q. I was out-kicked and headed prematurely to the rail.

After donating to their Blackjack table I decided to go ahead and sign up for a re-entry since it was only $25. That was the best decision of the day.

When I finally got in I sat down with about 10 big blinds so I knew it was going to come down to that one hand that I had to win, and soon. About the third hand in I got pocket queens and doubled up. A few hands later I doubled up again, then won another big pot after that. Suddenly I was right in the thick of things.

With good hands coming my way I soon found myself at the final table as the chip leader. There were pluses and minuses along the way, but eventually we had it whittled down to three of us. We made a deal over the remaining prize money with yours truly getting the biggest piece ($775) as the chip leader.

What a nice way to break in a new casino. If you’re in the Tracy area, stop by and say hi to Rommel and his hard-working staff who are doing a great job getting the new place running on all cylinders.

The next morning I got to Marysville Casino in time for their $20 morning bonus and was amused that they were playing $4/8 Hold’em High-Low. Always up for a new game I decided to give it a try.

It’s kind of like Omaha High-Low—only a whole lot different. Since it’s Hold’em you only get two cards and you can use one, both, or neither to make your high or low hands.

The chip stacks definitely took swings like Omaha, with mine going up and down quite a bit over the next couple hours. Then we switched to straight Hold’em and suddenly things went from mediocre to bad. Within an hour or so I was re-buying so I would have enough chips to get something back when the decent hands started to reappear.

And that’s just what happened. I worked my way back to having a little more than I started with just in time to hit the road on my journey north.

Very similar to the situation in Tracy, Angie’s Poker Room in Chico is now Casino 99, with a much larger facility closer to the freeway, more tables, and their own restaurant and bar.

I got there just in time for their Saturday night tournament which had a $32 buy-in for 6,000 chips. There were 27 entries that night (it was super hot outside and speculation was that people were staying home because of it) for a prize pool of $675.

Early on in the tournament I was winning enough pots to keep my stack reasonably sized, so I ordered some chicken strips from their players’ menu. They were excellent—crispy, juicy, and tasty—and so were the fries that came with them.

Rejuvenated, I proceeded to go on a bit of a rush, picking up chips and making my way to the final table. Once again I won the pots I needed to while watching others get eliminated. Before long there were only two of us left and we decided to chop for $221 each.

Feeling pretty good about myself, I decided to stick around (since I hand nowhere else to be that night and a hotel room around the corner). I jumped into their $1/1/2 no-limit game. I bought in for $100 and promised myself that if that was lost I was done for the night and could call the day another win.

I clashed a couple of times with the guy I chopped the tournament with, as he was making big bets with less than stellar hands. I think I took most of his tournament winnings from him.

After a few hours I was up to about $400 and thinking about calling it a night, when things took a turn for the worse (as they can in no-limit). Before long I only had about $120, then about $60. I was just about to break my promise to myself and re-buy when I decided that I was going to sink or swim with the chips in front of me.

Then I doubled up, and doubled up again. Before too long I had my stack bigger than it had been all night—about $700—so this time I did rack the chips and book the win.

I had such a good time and the food was so good that I stopped by the next morning just to have breakfast before hitting the road. Once again the food was excellent and I was back on the highway with a full belly and a healthy bankroll.

With time to make a stop on my way home I decided to veer a bit out of my way and visit old friends at Napa Valley Casino where I hadn’t been for a while.

As always, the cardroom was hopping with plenty of action. They had $3/6 and $4/8 limit Hold’em as well as $1/2/3 no-limit and $4/8 Omaha High-Low. Between these games and their afternoon tournament, every table was busy—including the Blackjack, Pai Gow, and Three Card Poker.

I didn’t wait too long for a seat in $3/6 and held my own for an hour or so while I waited to get called for $4/8. When I switched games I was up about a stack and feeling pretty good. After winning my first hand at the new table it was looking like smooth sailing.

When is poker every smooth sailing?

While trying to avoid the pitfalls of bad beats, suckouts, and coolers I watched my stack go up and down several times over the next couple hours. Fortunately, when it was getting close to time to head home a few nice pots came my way and I exited with an extra rack.

One of the things I love about Napa Valley Casino is you can always get a game, and the action is usually pretty lively. Plus they have the range of games from a relatively modest $3/6 to what I understand is a very big pot-limit Omaha (PLO) game on Tuesdays and Saturdays.