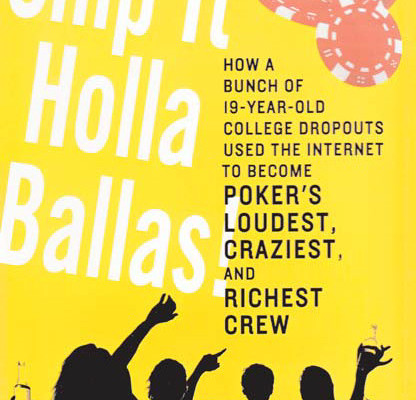 In their “don’t blink or you’ll miss it” lightning-fast-paced book, Jonathan Gro­ten­stein and Storms Reback—“Ship It Holla Ballas!” (St. Martins Press)—have perfectly captured the world of a group of young, intelligent, and ridiculously successful teenagers who set the poker world on fire.

They were still in high school when the Moneymaker boom occurred and the World Poker Tour was becoming must watch television. Coming from all corners of the country (and Canada), they were soon playing home tournaments with their friends, which led to checking out online poker.

Throughout the book the authors refer to these young men strictly by their online handles. Not really to provide anonymity (some of them are easily identified), but to maintain the continuity of the experience. The bulk of the book centers on the lives of Good2cu from Michigan and Raptor from Texas, with plenty of space for their friends Apathy, Inyaface, Durrrr, and more.

Having grown up with video games and the Internet, it didn’t take long for them to discover the benefits of strategy discussion threads at twoplustwo.com or to come up with the idea of multi-tabling on several computer screens.

These guys try to go to college. They try to keep their parents happy. But they are making just too darn much money sitting in their apartments and dorm rooms all day long. While several are in and out of college over the next few years, studying and writing papers never really stands a chance against the money they can make playing poker.

There are road trips to Las Vegas where they play with fake IDs and blow obscene amounts of money on strippers, liquor, and drugs. They trash hotel rooms and rental houses, then pay the damages in cash. Lawyers are on speed dial.

If there’s something stupid or outrageous that young men with too much money can do, they did it. Sometimes they get in way over their heads, and sometimes their bankrolls take a beating, but they keep coming back for more.

As they begin to turn 21 and can enter the World Series of Poker and legitimately sit in the Las Vegas poker rooms, the tension between the old-school veterans and the Internet newbies becomes palpable. Raptor is quoted as having said, “We were both calling the other side bad, but for different reasons. They were calling us bad because we gave off stuff or acted like nerds or whatever, and they were terrible because they were actually terrible.”

They were the stars of Internet poker and were successfully making the transition to the live game just when the Unlawful Internet Gambling Enforcement Act went into effect in 2006. At the time, Good2cu posted the following on the Ship It Holla website: “It now looks like [online poker] may all be over. I have no idea if I’ll be able to successfully return to the real world. I fear I may be like one of these ex-college athletes who is doomed to talk about his ‘glory days’ for the rest of his life … but if this is the end, it has been one hell of a ride.”

The authors sum it up nicely in the preface to the book where they write, “The Ballas were young, rich, brash, arrogant, and, thanks to the pervasive media culture that raised them, remarkably self aware…. They used [the Internet] as a way to wage war against the social idiosyncrasies that had previously defined them, the parents and teachers who doubted them, and a poker establishment that refused to take them seriously.”