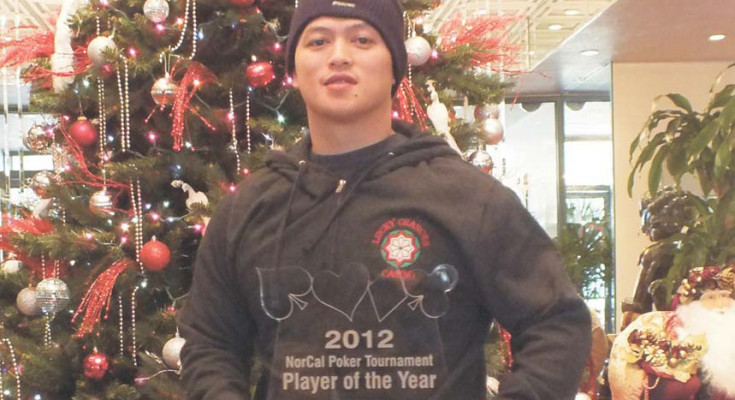 Sigua Repeats as NorCal POY in 2012

San Bruno’s Rellie Sigua dominated the field again in 2012, claiming back-to-back titles as The Cardroom’s Northern California Poker Tournament Player of the Year. This time Sigua grabbed the lead in March and never looked back.

By October he had as many points as he did in all of 2011 (7,302) but finished strong the last two months to end the year with 9,388. Also having excellent years were Jimmy Zeledon of San Jose who came in second with 6,838, and San Francisco’s Lawrence Chow had 5,844 which was good for third place.

Most points for any one tournament went to Dave Forster of Alameda, who scored 930 points at Lucky Chances Casino when he chopped two ways in a tournament with 315 players and a buy-in of $330 on April 29. In fact, Forster had three of the top 12 individual tournament point totals.

When asked if he had planned to pull off a repeat performance as The Cardroom’s POY, Sigua said, “I started thinking about it since I got the first trophy. I made it a goal for me to get the second one. To do it a second time, it makes me feel that I actually achieved what I wanted to achieve and it wasn’t luck. That’s why this one means more to me than the first one.”

Robert Bloom, tournament director at Lucky Chances concurred: “I think Rellie winning the POY contest again this year proved that last year was no fluke. His dedication to improving his game is unmatched by any of our regular players. He is also very willing to help new players improve their game. Fame and fortune have not changed him. He is still the same down-to-earth family man I first met five years ago when I started at Lucky Chances. He told me recently his next goal is to win a WPT event. Lucky Chances wishes him continued success in the future.”

While he would love to capture the ubiquitous “three-peat,” Sigua is planning to spend a lot more time on the road in 2013. He will follow the World Poker Tour circuit and play at least 10 events at the World Series of Poker. “A three-peat would really make a statement and I will give it my best shot, but I’m going to be traveling more often, going away and following the circuit. Hopefully, I’ll get a big score somehow and still represent you guys [in Northern California].

Another big event on his itinerary is the Shooting Star at Bay 101 Casino in March. While the allure of the $7,500 buy-in Main Event remains strong, the new $25,000 High Roller event is the one that he has fixated on. He will be playing the satellites to pick up seats in those events, where he says he usually does very well and feels he has an edge. That is how he plans to attack the rest of the WPT schedule as well.

“I’m shooting for the $25K event. That’s the one I really want to play. I know I’ll be playing with the best of the best, but I’m going to be playing to the best of my effort. I’m very excited about that.”

He’s already off to a good start, having entered two events last Fall in the Pot of Gold Series at the Grand Sierra in Reno and made both final tables. He took second place in the first tournament he entered, then sixth in the Main Event (which was won by former WSOP “November Niner” Matt Affleck).

He found going up against Affleck both educational and reassuring. He learned a few things by being observant, but felt like his game held up well. He doesn’t watch much poker on television or read the national magazines, so most of the pros are unknown to him which is just the way he likes it.

“I tell my friends when we travel—if you see anyone at my table who’s supposed to be a pro, don’t tell me because I’d rather not know. I’d rather keep playing my game and see their style of play and have me judge it myself.”

Away from the poker tables, Sigua says he likes to go to the gym to work out and visit old friends. After that, he likes to go home for family time with his wife and daughter, just being a “normal family.” He dedicated his 2012 to his family and beams with pride of his own when he says, “They’re proud of me.”

Below are the final standings in The Cardroom’s 2012 NorCal Poker Tournament Player of the Year contest. [We’ve printed as much of the list as possible here. For the entire list, go to www.thecard room-norcal.com.]