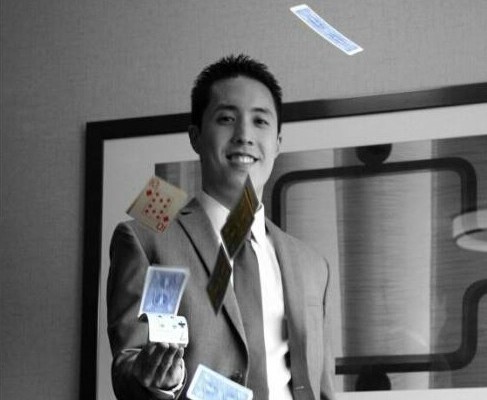 A lot of people have asked me about my strategy for limit holdem, so I’ve decided to share a few hand reviews from live sessions I’ve played.  Each hand includes analysis of why I chose to play the hand as I did.

Pre-flop: I am in the cut off with K♥J♥
Action: Middle position limps, I raise, both blinds fold, MP calls.

Anytime a pair comes out on the flop, it is even more likely that my opponent missed so my continuation bet is pretty standard.  Often times when a player limps and then calls a pre-flop raise they are holding a small to medium size pair, and his check raise on the flop seems to validate this range.  Since both my cards are probably live and I’m getting 8.5 to 1 odds, folding is out of the question and I peel the turn.  The A♦ is the perfect scare card especially now that my opponent has slowed down.  If he chooses to check raise me again on the turn, I have an easy fold. I pair up on the river and he checks to me again, my river bet is now a value bet as I’m hoping to get called by his middle pair, but villain gives up and gives me the pot.  Even if I don’t pair up on the river, I likely would bet any face card as it is likely an over card to his pocket pair range.

Pre-flop: I am on the button with 3♥3♣
Action: I open with a raise, small blind reraises, big blind folds, I call.

I make a standard pre-flop raise from the button with 3♥3♣.  Four betting is also an option against players who are less showdown bound, and folding is out of the question.  I could have raised this flop since I’m likely ahead of my opponents range, but I like the idea of raising a non-ace or non-king turn better because it will likely get me a free showdown on the river.  Raising the turn also protects my hand and is also more likely to get AK, AQ, AJ and other 6 out hands to fold than a raise on the flop.  Because I flatted the flop and chose to raise on the turn, my play shows strength and may even get a better pocket pair like 44, 55, 88 or 99 to fold because they are now 2 outters. If he three bets or calls and bets the river, I can fold easily. The turn was safe and I win the pot with my raise.

Pre-flop: I am in the small blind with Q♣J♠
Action: Folded to button, button limps, I raise, big blind three bets, button folds, I call.

I played this hand with a fancy semi bluff on the turn which is more likely to get a fold from better hands such as Ace high and low pairs than check raising the flop and leading the turn.  I am also okay if my opponent checks behind because it gives me a free river card, and I can still bluff the river.  Of course, if he decides to three bet after I check raise I am not a happy camper, but this is offset by the times a better hand folds and by the times I improve on the river.  Given the action on the flop, a lot of small pairs and Ace high or King high hands should be folding with this play.

Pre-flop: I am in the cut off with J♦9♦
Action: I open raise, button folds, small blind folds, big blind three-bets, I call.

When I flop a monster like this, the decision is whether to play it fast or slow.  Since there are no flush draws on the flop, playing fast goes down in value because it is unlikely that my opponent has a draw and he is less likely to put me on a drawing hand.  Calling the flop instead of raising allows me to get two big bets in with a raise on the turn and earns me an extra $30. Against a more passive opponent raising the flop may be a better value play especially if they don’t play the turn aggressively.

Pre-flop: I am on the button with Q♦T♦.
Action: Cut off raises, I three-bet, both blinds fold, and the cut off calls.

I three-bet pre-flop to isolate out the dead money from the blinds, and because my hand has good equity against the cut off’s stealing range.  On this flop, the cut off could be check raising with a flush draw, or any pair.  I can either call the raise and re-evaluate on the turn, or I can three bet and call a four bet.  The latter line might also earn me a free river card if I miss on the turn completely and potentially saves me a small bet (assuming he does not four bet the flop) since he is likely to bet again on the turn if I don’t take the lead on the flop. I paired up on the turn so I go ahead and fire again and the cut off gives up.

HAND #6 “Semi-Bluffing and Bluffing the River”

Pre-flop: I am on the button with J♥T♥
Action: Cut off opens with a raise, I call, both blinds fold.

On the button against a steal from the cut off, a 3 bet raise should always be considered when entering the pot in order to isolate out the dead money in the blinds, however, J♥T♥ does not have much showdown value against an opponent who calls lightly and a raise seriously diminishes my implied odds by forcing out the blinds.  Both blinds fold anyway so we go to the flop heads up.  It’s a dry flop that likely misses my opponent, but I don’t think a raise will get her to fold a big ace, so I decide to just call.  I’m getting 6:1 odds to hit either a Jack or a Ten which are likely both live cards, plus I have a backdoor flush draw and backdoor straight draw.  I go for the semi bluff on the turn with the flush draw and what I still believe are two live cards.  This play also represents that I could have trip 9’s.  The K♣ is a terrible card on the river as it likely hits my opponents range, so giving up on the river is certainly an option.  The only hand I can beat is a worse flush draw which is unlikely given her pre-flop raise, but I’m too stubborn and decide to still represent three 9’s.  In many cases I think I can get hands like ace high to fold here, and I only have to be successful about 1 in 7 times to still be profitable.

Showdown: Cut off shows A♦Q♥ and wins with Ace high. This time the cut off makes a great call.