Home Back Issue Highlights Tada is WPTDeepStacks champion in Turlock 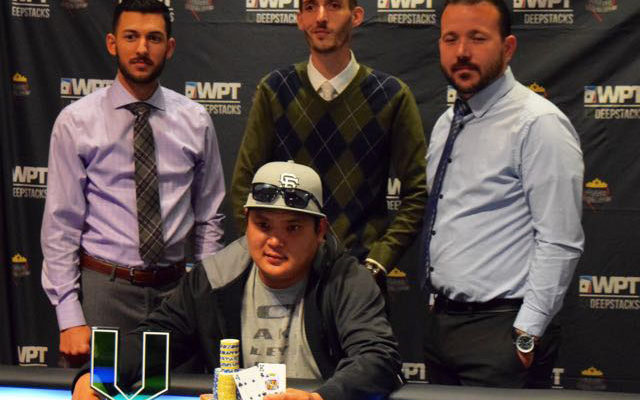 Tada is WPTDeepStacks champion in Turlock

Surrounded by friends all chanting his nickname “CuCu, CuCu,” Steven Tada took center stage on May 15 as he captured the 2016 WPTDeepStacks Main Event at Turlock Poker Room.

Tada, a Bay Area poker player who makes it to many of the big NorCal events from San Jose to Sacramento and more, joined a large group of players who came to Turlock looking for a WPTDS title. That flock of Bay Area players helped push the prize pool to an all-time Turlock record $201,760 for the $1,100 buy-in Main Event.

Coming in to Day 2 14th out of 47 remaining players, Tada started chipping up right away. He gained the chip lead with two tables left and he only very briefly gave it up to Mark Johnson for a few hands during final table play that Sunday night.

There was brief talk of an Independent Chip Model (ICM) chop once down to four-handed play. The final three players did reach an ICM chop agreement, with Tada taking home $36,129, Johnson a near-identical total of $36,067 and Tim Weimer $29,638 as the shortest of the three stacks when the chop was agreed to. The return on investment for Johnson and Weimer was huge, as they both won their way into the Main Event via a Turlock Poker Room $125 Mega Satellite.

All WPTDeepStacks Main Events come with a $3,000 Championship Event Package for a December tournament in Calgary, Canada, plus the WPTDS Trophy and WPTDS Player of the Year points. Tada, Johnson and Weimer agreed to play out the tournament for the POY points, the trophy and the trip to Canada for the WPTDS season championship tourney.

Most final tables start 10-handed, but there were eliminations at both short-handed tables with 11 players remaining, as both Armando Perez and Steve Silva fell, leaving nine at the final table.

Rafael Gonzales was eliminated in 14th place, but that finish secured his Player of the Series title. Gonzales won Event 5 and also had a third- and fourth-place finish for four cashes in the seven events. He won a prize package provided by Turlock Poker Room and WPTDeepStacks.

Johnny Vargas was winner of the kickoff event, a $350 buy-in with two starting flights, taking home $3,775 as part of a three-way chop with Rich Patterson and Rick Draper. Patterson also had a second-place finish in Event 4 as he finished runner-up in the series points race. Draper was winner of the final event of the series, the $150 Turbo.

Laurence Louie, second in the WPTDeepStacks Main Event in Edmonton, Canada, came to Turlock as he was following WPTDS through California. He was winner of Event 2, $125 Hold’em, in a three-way chop with Guy Davidson and Gonzalez.

John Rogers picked up a series win by taking down Event 3, $125 Hold’em, in a four-way chop with Quoc Duong, Johnny Stack and Mark Lehnert.

The 10 days of WPTDeepStacks Series tournament play drew a large mix of both local players and those traveling from around Northern California. Main Event champions from California-based Heartland Poker Tour and other tour events came out for tournament play in Turlock. They all expressed that they’ve found another great place for both live and tournament play in their region.