Home Featured Stories Thanks for the contributions! 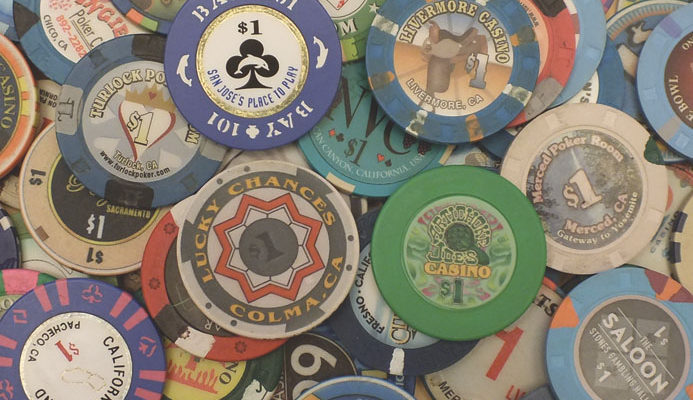 Thanks for the contributions!

Randall RappMay 10, 2017Featured Stories, May/June 2017, NorCal Poker AmbassadorComments Off on Thanks for the contributions!

In this issue we decided to feature our NorCal columnists by starting their articles on the front page, giving them even more of the attention and notoriety they deserve.

On behalf of the entire Northern California poker and casino community, we would like to thank them for their thoughts, insights, wisdom, humor, and for sharing their experiences.

If you happen to run into one of them at your local casino, be sure to say “hello” and let them know you appreciate their contributions. From our end, we certainly try to let them know this as often as possible.

Sunday morning at Bay 101 Casino they have a $180 tournament that I thought I would give a try since I was up in that neck of the woods. With over 100 entries the prize pool was pretty substantial, and I was looking forward to finally making the money in one of their events.

There wasn’t much action for me the first couple of levels as I patiently waited for hands worth playing. There were only a few. When the break came after level three, I was hovering just above my starting stack. When you hardly play any hands you don’t lose chips very fast, but you don’t tend to make progress either.

After a few more levels the blinds and antes were starting to take a heavy toll, and with only about 12 big blinds it was time to find a good spot to shove. One late-position shove secured the blinds and antes, but I was still card dead. Down to eight blinds I went all-in with A-J and got called by a huge stack in the big blind with K-Q. A king on the flop sent me to the rail in 27th place—far from the money, but at least in the top 25 percent.

After going to the restaurant for a very late breakfast of their excellent corned beef hash and eggs, I ventured out to the live games. After a brief stint in $3/6 I got the seat I wanted playing $6/12.

After a couple of hours staying just barely in the plus column I started to heat up and took down a few big pots. When it was time to go I was just $6 short of paying for my tournament buy-in.

Things were looking up.

I traveled over to Livermore Casino to play in their Sunday night offering. Because it was the last evening tournament of the month there was a $20 bounty on everyone, making the total buy-in $120.

Once again I couldn’t seem to draw any decent hands in a tournament. This one has shorter levels and overall a quicker structure, so there wasn’t as much time for patience. I barely managed to win a couple of hands to stay alive for the first three rounds.

Being card dead took its toll again, and when my short stack shove with 8-8 was called by J-J it was all over. Luckily they had both $4/8 and spread-limit games going, so when I got a spot in the $4/8 half-kill game I took a seat, hoping to at least replicate my earlier feat of paying for my tournament.

The tables at Livermore Casino always have plenty of action, and this night was no exception. The pots were big, with lots of pre-flop raising that didn’t get many to fold.

My stack took some hits, but I knew I could do okay if I just won a few of these hands.

Eventually I took one hit too many and had to reload. That was when things started looking up though and soon I got back to a little better than even. Unfortunately it was getting late and we were playing short handed, which is always more volatile. When the game broke up the timing was less than ideal for me, as I had just missed out on a couple of pretty big pots.

I called it a night, down a little in the live game and short one tournament buy-in.

The next day I was driving up the peninsula and decided to stop in at Artichoke Joe’s. I hadn’t been there in a while, and the place hadn’t change much at all. It’s a nice looking place, and you’ve got to love all those fish tanks.

They had some no-limit games going, but I decided to stick with $6/12 and was glad I did. This table was almost as lively as the $4/8 game from the night before. One player in particular was the guy who likes to raise nearly every hand pre-flop. I have also found he also tends to be the guy who rebuys a lot.

In between raking in big pots I ordered a grilled cheese sandwich (with bacon). Bread, meat, cheese—what’s not to love? The whole time I was there I never went much below my starting stack, and once I had doubled it I never looked back. My big hands were holding up and more than enough of my draws were coming through to make them profitable to stick around.

In the end I cashed out with four racks, one of my more profitable sessions in a while. It’s nice, every now and then, to be the windshield and not the bug.

The plan was to get some more $6/12 action at Lucky Chances while the Battle of the Bay Main Event played down to the final table. When I arrived, they were already down to 14 players and it wasn’t long before the final table was set.

So I skipped the live game (and dinner!) to follow the action. They had plenty of other interested onlookers in addition to yours truly, so there was lots of activity around the tournament area.

The structure of the tournament seemed just right from my perspective. Plenty of chips, 40 minute levels, yet not so much of either that it could go on forever.

When they began the final table, seat three had close to half the chips in play, and he seemed a lock to go deep if not win it all. But he kept getting involved in pots with seat 10 and they weren’t going his way. Before you knew it (or probably he knew it either), seat 10 was the massive chip leader and seat three one of the short stacks.

By the time they got down to three-handed play, seat 10 had more than half the chips, and seats five and eight had just enough to be dangerous. Seat three was long gone.

As is the way of tournament poker, no lead is ever safe. Seat 10 had some terrible coolers and his huge lead evaporated. One more cooler and he was out in third, after which the other two players agreed on a deal.

Which was good for your humble Ambassador, who had a long drive home ahead of him. If those two had played it out, who knows how long it might have lasted.

Previous PostSummer is coming! Next PostLee wins Main at Battle of the Bay