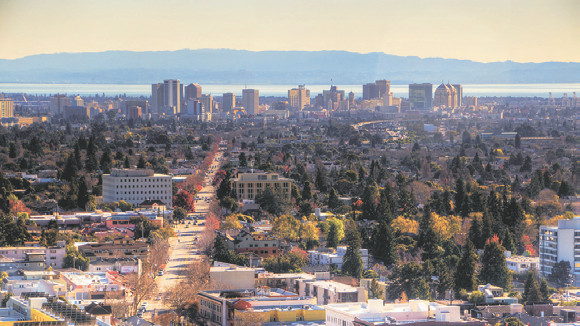 The CardroomJan 10, 2015Casino News, January/February 2015Comments Off on The Cardroom “occupies” Oakland

There’s a particular street in a neighborhood known more for protesters than poker players that has always intrigued me. That street would be Telegraph Ave. in Downtown Oakland. It slices through Oakland’s mean streets on a diagonal jaunt as opposed to most of the square, neighboring thoroughfares that adjoin it. As such, it begs to be different.

When I was a kid growing up in Oakland during the 60s and 70s, Telegraph Ave. was where all “those draft-dodging hippies” would demonstrate against the war in Vietnam. They would start at Oakland’s city hall and march straight down Telegraph Ave. to U.C. Berkeley’s Sather Gate.

It was also home to several places that bring back warm memories. Places like Leo’s Guitars where famous musicians like Santana, Jerry Garcia, and John Fogerty would stop by to plug in and test drive a new guitar to the delight of the neighborhood.

There was Genova’s Delicatessen which was, and still is, the best place to buy raviolis, and the Kingfish Pub and Café—the epitome of a neighborhood sports bar since 1922. And let us not forget Bertola’s Italian Restaurant. Located in heart of Telegraph Ave’s.

“Little Italy,” Bertola’s (RIP) always served more food than you could possibly eat in one sitting.

My old girlfriend’s father, Albie, was one of the owners so I always tried to behave myself in that establishment when I finally reached drinking age. Of course, with Bertola’s legendary triple-shot cocktails for $1.50, available seven nights a week, this was easier said than done.

I will never forget Raider night at the Italian dinner clubs like The Columbo and The Ligure. Back in those days, half the team would show up led by the immortal Daryle Lamonica, Jim Otto, and Big Ben Davidson. Those great Raider teams would feast with the local Italian community like there was no tomorrow. It didn’t get much better than that for a young Raider fan.

Last but not least, Telegraph Ave. always had a cluster of Asian restaurants that served the kind of tasty dishes most Irish/Italian kids like myself had never seen before. As it turns out, our endless search for a reliable firecracker connection led us to new friends and new dishes like those orange Peking ducks I saw hanging in the window.

While I was a little too young to know what time it was politically, I knew that all the buzz, the food, the protesters, and the firecrackers made this street something special. Nowadays, that same stretch of road serves as a playground for the Occupy Oakland protesters. This time, I am too old to go out and raise hell. However, the rebel protester deep within me is happy knowing that we regularly “wallpaper” that particular neighborhood with copies of The Cardroom.

When that venerable old cardroom, The Oaks, started advertising with us a few years ago I stopped by to see some of my old friends at the bars and restaurants along Telegraph Ave. With The Oaks only a few blocks away on the Oakland/Emeryville border, it was a great excuse for me to get re-acquainted with some of my favorite places from the old neighborhood. The reason that this is relevant is because many of these bars and restaurants are the same places that allow us to put a bundle of poker papers in their lobby.

As it turns out, a lot of the businesses along Telegraph Ave actually support their local cardrooms! With all those crazy protesters running around Oakland, I wanted to make sure that people remember where Oakland’s most diverse Restaurant Row actually resides—it’s on Telegraph Ave, down the street and around the corner from The Oaks!
While there has always been a cardroom on the corner of Park & San Pablo Ave. since Conger’s Tavern opened up in 1895, that same corner eventually became the Oaks Card Club. It’s been owned by the same family since the mid-1930s and has been a landmark to the local community ever since.

I will venture a guess that they were named after the old Pacific Coast League’s Oakland Oaks Baseball Club which came to Emeryville in 1903 and built their ballpark along San Pablo Avenue in 1913. The Oaks Baseball Club was, at one time, an affiliate for the New York Yankees and boasted Hall of Famers like Casey Stengel, Mel Ott, and Earnie Lombardi. It also helped spawn the legend of the infamous Billy Martin.

Emeryville’s local field of dreams was demolished in 1955, 60 years after the first gambling hall was erected on the corner, seven years before I was born, 13 years before the Oakland A’s came to town, and 25 years before Billy Martin eventually returned home to create “Billy Ball.”

It is unfortunate that over the years respect for local history has been watered down like a cheap drink. If neighboring Telegraph Ave. had a cornfield, I’m sure that Big Ben Davidson himself would step out of it to head-slap a few protesters for interfering with his right to eat, drink, smoke, gamble, and watch sports in a safe, obstacle-free environment.

I am just as sure that the great Billy Martin would appear next to kick dirt in the face of excessive political correctness. He would remind everyone that eating, drinking, gambling, and professional sports helped build this town from scratch over the last 100 years. He would jump up and down and protest wildly that winning isn’t always pretty, and you’ve gotta use every tool at your disposal to hold on to your precious roots without destroying the neighborhood.

I am 100 percent positive that the man who broke Joe Namath’s jaw, along with the guy who could out-drink Mickey Mantle would make it perfectly clear that losing any more of these time-honored establishments, institutions, eateries, or pro sports teams because of unruly protesters, bumbling politicians, or political correctness would be a @#$%^&* shame. Unacceptable. It can’t happen.

I have no doubt that their protests would raise clouds of dust big enough to choke all of their critics—right before they spilled one last drink, hollered one last obscenity, and disappeared back into the corn somewhere along Telegraph Ave.

But for all their hell-raising and semi-coherent bluster, you never heard about them actually burning the place down.
There’s a lesson in there somewhere. It revolves around eating, drinking, gambling—and yes, protesting—responsibly … or at least semi-responsibly. If I have to raise the ghosts of Big Ben and Billy Martin to make my point, so be it. People need to know there’s a lot more to Telegraph Ave. than broken windows and tear gas.

Over 100 years of incredible, local history has been made right there on that particular stretch of road, slicing through that particular neighborhood. Go see it, and feel the power that it has shared with its people. It’s just down the street, around the corner from The Oaks.