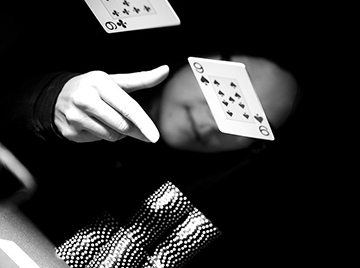 The fine art of folding

Bill PattyFeb 07, 2020Guest Blogger, January/February 2020Comments Off on The fine art of folding

On several occasions, someone has asked to sit behind me to learn and see how I play. The average amount of time they sit there is somewhere between 10 and 20 minutes. That’s all? Why? Because I fold a lot of hands.

Being a winning cash game player is, in my opinion, neither glamorous nor exciting. It is about being patient and playing smart all the time. Do I make mistakes? Of course. Are my reads always right on? Definitely not.

But I play most of the hands I should in the position they should be played in, I don’t go on tilt, and I FOLD A LOT! Is that so hard? Yes, as a matter of fact, it is.

One big advantage those who play often have is they are usually not in a hurry. Recreational players come in for an hour or four and want to have fun—win or lose. They want to play hands, not stinkin’ fold!

To many players K-9 off suit under the gun seems like a plenty good hand. That is pretty different from my own personal record of playing two hands in an eight-hour session of limit Hold’em. That’s right—two! I never played a hand for the first four-and-a-half hours. The second hand I played was at the seven-and-a-half-hour mark.

I may be off by a little, but I remember being down $128 in blinds before I played A-A. The other hand I played was K-K in a kill pot of $4/8. Two hands, two winners, and an overall win for the night. How did I get so much action!? That will have to be a topic for a future column.

Granted, I played as tight as Fort Knox 10 years ago when I started propping. I have learned a lot since then, but what I haven’t forgotten is the art of the fold. Patience Grasshopper!

Of course, pre-flop folding is not the only time a fold is important, but it is often the easiest. After the flop, when you hit bottom pair, you are faced with the question “now what?” Like most poker situations, it depends. There are so many factors that come into play on later streets.

As you become a more skilled player you will have much more to think about and playing more hands will be profitable. If you are still having trouble figuring out what to do after the flop, tighten it up and watch the action. The art of the fold is a valuable way to become a better player.

On a given hand we watched one of the fish cap a three-diamond flop and eventually lead out on the river when the board paired. There was only one player other than the fish left in the pot who wasn’t all-in.

As is often the case, I found myself asking “why?” Is the other player going to call the river with a high less than the nut flush? The fish could also have had the nut low, but he made a hurried, nervous bet on the river which indicated he did not. The other player folded and by some miracle the fish scooped as both the all-ins had their lows counterfeited.

So, would you lead the river? Gary said the aggressor could always fold if he got raised. Huh? I disagreed. He continued, stating a good player could fold. Hmm? In theory this is true, but with this pot size, good players probably check and call. I said to Gary that most Omaha players call this raise anyway. He later commented that playing too many hands is most people’s problem. Now I think he’s on to something.