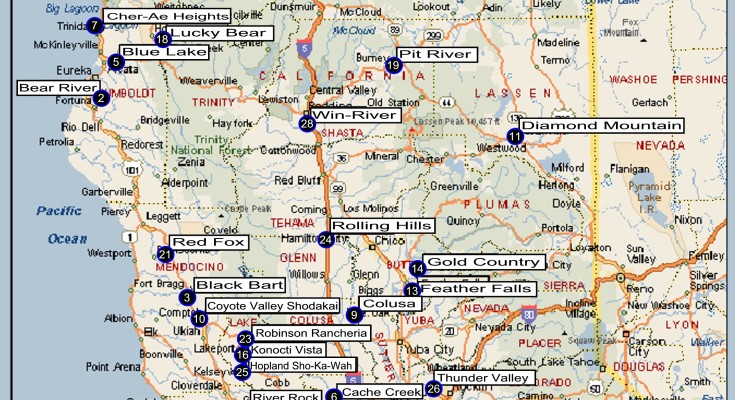 The Federated Indians of Graton Rancheria have already begun construction of the Graton Resort & Casino on the northwest edge of Rohnert Park after nearly 10 years of permits and politics. It is expected to be open for business this coming December.

Plans call for a 332,500 square foot casino with 3,000 slot machines, table games, and a dedicated poker room. They will also have numerous dining options, lounges and bars, and entertainment running from local favorites to touring headliners.

Still wading their way through the maze of bureaucracies are the North Fork Rancheria of Mono Indians and the Enterprise Rancheria of Maidu Indians.

The federal Bureau of Indian Affairs has agreed to put land north of Madera near Highway 99 in trust for a proposed off-reservation casino for the North Fork tribe after eight years of lobbying state and federal officials. This came two months after Governor Jerry Brown gave his approval at the state level.

Their casino is slated to have 2,000 slot machines and 50 table games.

The Enterprise Rancheria signed agreements in 2002 with the Yuba County Board of Supervisors and the city of Marysville to build a casino, hotel and convention center on property near the Sleep Amphitheatre in Wheatland, but only recently got approval from the Bureau of Indian Affairs. Governor Brown has also signed off on this project.

California’s Indian casino market is the biggest in the nation. Fifty-nine of the state’s 109 federally recognized tribes run gaming operations that rake in a combined $7.5 billion annually.