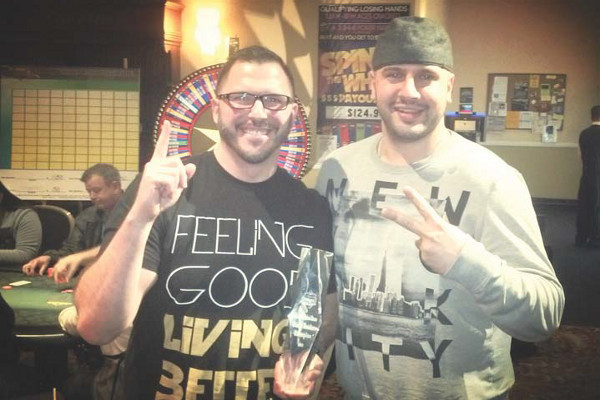 The CardroomJan 10, 2014Casino Updates, January/February 2014Comments Off on TPR finishes up Grinder Showdown

In 2013 Michael “The Grinder” Mizrachi was the Turlock Poker Room and Casino’s official Poker Ambassador. During his ambassadorship, TPR was host to the Grinder Poker Series (GPS)—a yearlong series where players earned points toward the Grinder Showdown.

Seven tournaments where held for players to earn points toward the Showdown, a heads-up bracket-style tournament for the top 16 point earners throughout the GPS. The winner of the tournament would then have the opportunity to face Mizrachi heads-up for the big prize.

Torina, president and CEO of DeepStacks, defeated Mizrachi in the final showdown, taking home the trophy, cash and bragging rights. (Mizrachi is a DeepStacks pro and good friend of Torina.)

After the victory, Torina said, “It was a pretty tough heads-up structure. Any time you’re playing a single elimination heads-up format it’s always difficult—controlling pots and trying to evade luck and all that stuff. It was extra special to beat Grinder. He and I are so tight it’s like I just love beating him.

“I just love Turlock,” he added. “They’re the smallest venue we do on the tour, but they’re the best in terms of their customer service and how friendly they are and open minded to try new things. Just coming up here to play a tournament was fun enough. Winning it was extra special.”

Hundreds of poker fans, amateurs and local pros came to the Turlock Poker Room for the seven events leading up to the Grinder Showdown, vying for the opportunity to play against two-time WSOP Players Champion Mizrachi. During his trips to Turlock, Turlock Poker Room’s patrons filled the $3/5 no-limit board, anxious to get in some live action, in addition to tournament play, with the future Poker Hall of Famer.

“It was a pleasure as an employee and a poker fan, to have an ambassador of Michael ‘The Grinder’ Mizrachi’s caliber represent not only Turlock Poker Room & Casino but poker enthusiasts all over the Central Valley,” said TPR director of casino relations Mario A. Alvarez. “Some of our patrons succeeded in felting the Grinder, others were served. An element that remains consistent for our patrons is knowing that Turlock Poker Room and Casino will continue to offer a gaming destination which provides them with the best resources to bring their game to the next level.”

On President’s Day, Monday, Feb. 17 at noon the Turlock Poker Room & Casino will hold a bounty tournament with a $10,000 guaranteed prize pool.

Buy-in is $100 for 10,000 chips with an optional $10 for 2,000 additional chips. Rounds will be 20 minutes long with registration open through the end of round six. No re-entries will be permitted.