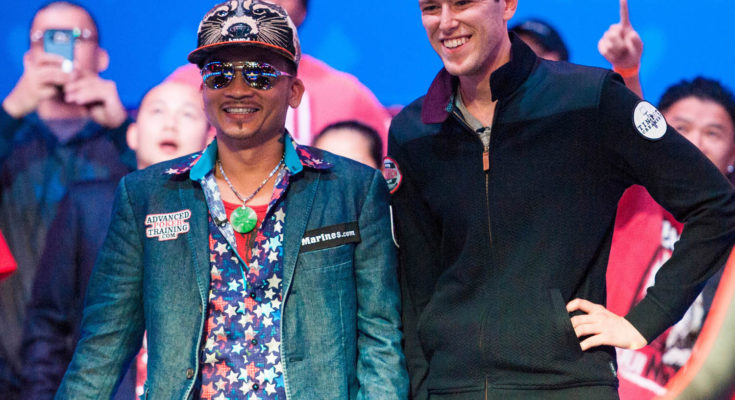 The final table for the 2016 World Series of Poker Main Event, held Oct. 30 to Nov. 1 at the Rio Hotel and Casino’s Penn and Teller Theater, was one of the most dramatic in history. Much like game 7 of that other World Series, this one had it all—big double ups, lead changes, stressful calls and folds, exciting river cards, gritty determination, and one of the longest heads up battles ever.

Gordon Vayo of San Francisco started the final table third in chips, took the lead a couple of times but eventually was worn down and out by Las Vegas player Qui Nguyen. His second place finish still brought a $4,661,228 payday.

For more than six hours the two battled heads up. It took 182 hands for the first seven players to be eliminated, then it was another 182 hands before the final hand was played.

Vayo began heads up play with about 60 percent of the chips but half an hour later Nguyen was on top. Then Vayo reclaimed the advantage as the two played the next 90 minutes without either of them gaining much ground.

When Vayo flopped two pair and had Nguyen betting into him it looked like Vayo was poised to take a big lead. Then came the river—a terrible card for Vayo. It paired the board, counterfeited his second pair, made a full house possible, and also completed a flush draw. When Nguyen went all-in Vayo tanked for about seven minutes before giving up and folding. It was a great move, because Nguyen had indeed made the flush, but it also left Vayo with a much smaller stack of chips.

An hour later Nguyen had more than 80 percent of the chips, but Vayo doubled up to get back into contention. His chips continued to go in the wrong direction. Soon he was down enough to go all-in with Q-5 on a queen-high flop. Unfortunately Nguyen had A-Q and it looked like it would be the last hand. That is until runner-runner flush cards brought Vayo the much needed double up.

It was more than two hours later, with Nguyen steadily taking bites out of Vayo’s chips, before the final hand came at 3:20 a.m. Vayo three-bet, going all-in with his last 53 million chips. Nguyen quickly called showing Kc-10c, while Vayo had Js-10s. The flop was 7d-Kd-9c giving Nguyen top pair, but Vayo had a double gutter straight draw, so he needed an 8 or a Q (or a combination of 10s and Js) from the last two cards. The turn was the 2s and the river the 3h, so the marathon match was finally over.

While Nguyen and his rail celebrated, an obviously tired and disappointed (but still thoughtful and smiling) Vayo was asked by pokernews.com how he managed to hang in there so long. He said, “I guess I just wanted that bracelet. Ultimately, I wasn’t going to give up. I wasn’t going to stop playing as hard as I could. I wasn’t going to shorten any of my thoughts or decision-making process.

“I didn’t get a ton of hands heads up and, I mean, whatever. I ran so, so insanely well this whole tournament and I’m not at all bemoaning any of my luck, it’s just, it’s your dream to win the bracelet so just to get that close is devastating from an emotional perspective. But I’m just so, so lucky to have gotten this far. I ran just so unbelievably well, and so I have no regrets as far as the tournament is concerned.

“I have nothing but respect and admiration and I just think he gives off great energy and is real enthusiastic about it. He’s not stressed out and is just a fun person to have heads up for sure.”

Previous PostWho decides what is “excessive”? Next PostHPT Championship won by Hinkle