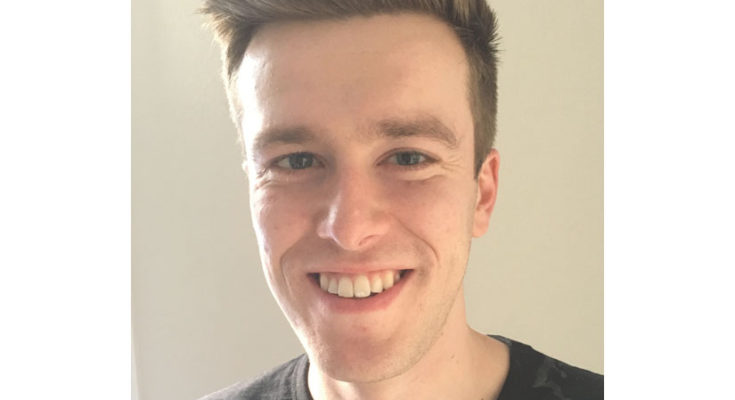 San Francisco’s Gordon Vayo, a veteran of online and live poker at the age of 27, annually plays a full slate of events at the World Series of Poker in Las Vegas. He’s had success to justify this, including a second-place finish in $3,000 No-Limit Hold’em Six-Max in 2014.

It all seems to have been a prelude to this year’s Main Event though, as he waits until Oct. 30 to begin final table play against eight highly-motivated and skilled opponents. He is third in chips with just under 50 million (the chip leader has almost 75 million and the short stack a bit more than 6 million), so he is in good shape to take advantage of this opportunity at claiming the title, bracelet, and $8 million first place prize.

Vayo is already guaranteed at least $1 million (ninth place money), but thinks he can do a whole lot better than that. “I’m a confident realist, I guess. I have a good seat at the table, a good draw, a good stack. I think I’m the best player at the table, not by a long shot or anything … there should be probably four or five guys that feel that way. You have to be confident in yourself,” Vayo said. “At the same time, I’ve been playing poker for so long that, it’s not like I’m coming into the final table and saying, ‘I need to win this. If I don’t win this I’m going to be disappointed.’

“I’m going to try to continue the strategy that I’ve held throughout the entire tournament, which is just taking things as they come and just trying to make the best decision possible given how things play out. If I play as well as I possibly can and I wind up in third place or fourth place, I’m not going to be devastated … it’s more if I make a mistake or something regardless of the place that I finish, I’ll be upset for a while. I just want to play as well as I can and let the results just happen.”

Originally from central Illinois, he moved to San Francisco about five years ago when his fiancé got a job there, and his job as poker player wouldn’t prevent him making the move. Now he splits his time between playing online and going primarily to Bay 101 Casino and M8trix.

He also said that he likes to travel to play in some big tournaments, though he mostly sticks to California, Nevada, and Florida.  “I pick and choose stuff that’s more on the East Coast. I always go to the Florida tournaments, over at Hard Rock, those are always really good.”

Speaking of his experience in the Main Event, Vayo said, “I can remember crucial hands that I played. Remembering hand for hand, it’s hard because you’re so focused in the moment in that tournament. It’s just so important to take it hand by hand, not get too far ahead of yourself. You have to stay just incredibly focused.

“I wasn’t ever really short on chips until maybe Day 7. I was on a super grind, basically until Day 5 or Day 6. On Day 6 I got insanely lucky with one hand. We were at 80/160K blinds, and an early position opened to 350, the button three-bet to 850, and I was in the big blind with ace-king and about 5 million chips and I went all-in. The original raiser folded and the button snap-called with two aces.

“This was with 38 people left. The flop came Q-10-x, turn J. It was pretty surreal. It was by far the most emotionally tough situation, getting that lucky at that important of a moment was pretty surreal. After that happened … I was at a really tough table anyways, it worked out, but I had to play it really tight after that because I was in shambles. I just didn’t really know, my brain was just like I couldn’t come to terms with the fact I had just beat aces with ace-king with 38 left in the Main Event. I was scatter-brained for a little while when we ended the day with 27 left.

“Once Day 6 ended I was just jacked, very shaken. Not consciously. More subconsciously. I’ve been playing for a long time. I’ve been doing it professionally for 10 years. I’m very young—I started very young at least. That type of luck I’ve really … that deep in the biggest tournament of the year … I’ve never really experienced that.

“Yeah, it was very scattering for my brain. I went home that night, I was able to regroup, come to terms with what happened, and then kind of embrace it. I felt like I was free-rolling at that point. I had already made 30th place, it was maybe $160,000 or something. By the end of the day I had already made over $100,000 from that hand.

“It was a little bit easier when I thought about it in objective terms to just relax on Day 7. I was all-in on Day 7 with like 16 people left. I didn’t even really feel stressed out weirdly. Day 6 took all my stress—even in a good way, let alone when it was bad stress. I got incredibly lucky, but in a weird way it scattered me so much that when I went home to try and think about it I was able to get an extra calming sense. I really felt like anything that happened from this point on was really just depositing.

“I could come out in 12th place or something and I would be sad, but at the same time I would have been like, ‘you got so lucky in that spot.’ Really anything that happened on Day 7 was just a gift. I think that helped with my Day 7 presence. Like I said, I was completely stressed and ­anxious on Day 6 but on Day 7 I really wasn’t.”

Though he started Day 7 with a stack he describes as a bit below average, his relaxed demeanor helped him through the day. It wasn’t until there were 14 players left that he looked down at his stack and realized he could make the final table.

“I suppressed my expectations from the highs and lows of the ride during the tournament,” he added. “It’s very important to stay on an even keel, take things one hand at a time. It was so embedded in me to not get too excited, not get too low, too high.

“I had this crazy streak at like 200/ 400k where I just got smashed in the face with the deck, I was pretty short with … I think I had about 7 million at 400K big blinds and I ended the level with over 40 million.

“I doubled up when I got 10s and Jerry Wong opened and I went all-in with about six-and-a-half million and he called with A-Q and I won. Then maybe two hands later I opened with aces, then a guy flats, then a guy’s all-in for 7 million with A-9 suited and I win that. Then I was in the big blind like three hands after that with 6-8 of spades and Jerry was in the highjack and he opened for 900K. I called and the flop came 4-5-7. Completely insane. I literally went from about six-and-a-half, seven million to over 30 million in like four hands.

“Then I eliminated this guy in 15th place or something with A-K versus A-J. When I won that hand I think it put me up to 35, 37 million or something. At that point when there were like 14 left, I saw that I had that much … that was the first time during the entire tournament that I really started to feel like I could actually make the November Nine.”

In preparation for the final table, Vayo hired Tom Marchese (2010 CardPlayer Player of the Year) as a coach and they plan to do as much Independent Chip Model (ICM) work as they can fit into the time available.

Elaborating, Vayo said, “ICM is basically a way of quantifying the dollar amount missing with the remaining prize pool, the pay jumps, any other people left, and correlating with their stacks and the payouts. It’s a less broad strategy at work, very specific instances based on the exact dynamics that you have at the time. It’s game theory oriented in a way that it’s quantifying exactly the expectation of each decision you’re going to be making. Those expected values are going to change specifically based on the stacks at the table and payouts accordingly.

“You’re not going to prepare yourself for every unique situation that happens, so it’s more about preparing and understanding the dynamics that go into the reasoning as to why something becomes a certain play, why something becomes a fold, instead of a call or a raise. Things like that. Discussing the variables that go into those and hopefully preparing myself best so that when the inevitable situation that we haven’t specifically studied for occurs, it will be determined based on dynamics and things like that a little bit more comfortably.”

As for specifically preparing for the individuals at the final table, Vayo said, “I think there is a lot of misinformation that can be spread. You can expect people to use maybe one of two or three different styles of approaches to the final table. I think we’re going to be really ICM conscious … are they going for the win or are they just there to enjoy the experience. If you prepare too heavily for a specific way that somebody’s going to approach the scenario and you don’t know for a fact  how they’re going to approach things, and then they approach it from a different scenario you might actually be doing yourself a disservice in the way that you expect them to handle the final table. So I think the best thing to do is focus … and wrap my brain with as many of these scenarios as possible so that when the final table starts to be played I can kind of figure out how people are approaching things and go from there.”

For a complete listing of all your friends and neighbors from Northern California who have cashed at the WSOP, go to thecardroom-norcal.com/norcal-wsop-results/.