Home Back Issue Highlights West victorious on HPT for $154K 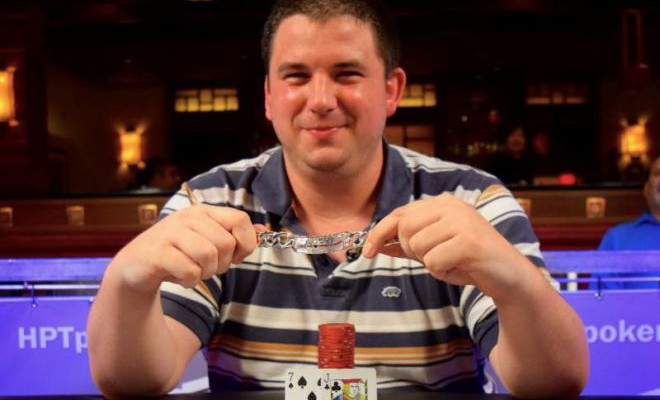 West victorious on HPT for $154K

Back in January, Tom West finished third in the Heartland Poker Tour Main Event at Thunder Valley Casino Resort for a score of over $64,000. It’s not easy to improve on a finish of that caliber, but that’s exactly what West did on Sept. 28. The caterer from Mountain View defeated a field of 464 players to capture the HPT Title and $154,590. “I feel incredible,” said the new champ after the win. “It’s hard to express in words how it feels.” West faced plenty of challengers throughout the three-day tournament. One of his toughest foes was runner-up Nic Vu of San Rafael. On the final hand of the tournament, Vu called West’s all-in on the flop with a flush draw. The fifth diamond never came and Vu’s day ended one place short of a victory. The poker pro still took home $94,500 for his efforts. Marketing VP Randall Smith listed his career earnings at $3,500 coming into the final table. The Tracy man will surely go home with a smile on his face after finishing in third place and tallying a $62,642 score to that total. Modesto’s Minh Nguyen scored the biggest cash of his career when he took down the first preliminary event of the HPT series. He followed that win with another strong showing in the Main Event, making his first appearance at a televised table. Minh’s magical run came to an end in fourth place. The life insurance agent earned $43,553 for the finish. This was the tour’s fifth visit to Thunder Valley Casino Resort. The venue just outside of Sacramento has quickly become one of the favorites among HPT faithful. Many notable players, including Stan Jablonski and Greg Raymer, complimented the property and staff throughout the weekend. HPT has already announced it will return to Thunder Valley in late January for another series. When play began on Monday, Craig Gold was the lone short stack at the table. It didn’t take the business consultant long to chip up, though. Gold would hang around long enough to finish in fifth place for a $32,598 payday. The Belmont native plans to put most of the winnings into savings. On the other end of the chip spectrum when the day started was real estate investor Adam Ghattas. The Reno man played well early on with the chip lead, but found himself on the losing end of a big hand with Vu right before the dinner break. He busted out of the tournament shortly after the players returned. Ghattas collected $25,205 for sixth place. David Carey’s day came to a close when the eventual champ put him to the test before the flop. Carey called West’s bet—which put him all-in—with pocket sixes. West flipped over ace-queen, making Carey a slight favorite in the hand. The flop didn’t produce any outs for West, but a queen on the turn sealed Carey’s fate. The self-employed consultant from Rohnert Park was sent to the rail in seventh place with $20,500. Daniel Hatch also exited at the hands of West. The eighth-place finisher earned $16,803 for his weekend’s worth of work. Before his departure, Hatch doubled up online advertiser Doron Shako early in the day. The double up extended Shako’s stay at the table, but not by much. He lost to Gold shortly thereafter to become the first player eliminated. Shako, of San Jose, left with $13,442. Courtesy of Heartland Poker Tour