Home Featured Stories You made my day! 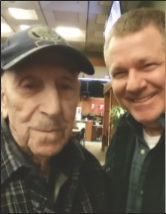 You made my day!

Do you know that one hand that defines your day? The one where you get it all-in preflop with Q-Q against A-K suited and double your stack? Or when you flop a straight in a huge kill pot and it actually holds up? Those are nice days!

In a long session, of course, there can be several hands like that. As a poker prop, however, one hand often literally makes or breaks my day.

Last week I was playing in a very live $4/8 game. A player in late position raised after four limpers had entered the pot. The small blind called. I was in the big blind and looked down at 3-5 of clubs.

This is certainly not a hand I would play under the gun, but it was plenty good enough with all this action. I called, as did everyone else, and we went to the flop seven-handed with $56 in the pot.

The flop came 3-5-7 rainbow. Now that’s what I’m talking about! With so many players in the pot, slow playing was never an option. I led after the small blind checked, and the player just to my left raised. Huh?

This raise only detoured one of the players in middle position and when it got back to the original raiser, he three-bet, the small blind folded, and I capped the pot. Heck, I’m not folding!

My cap caused one other player to fold, so we were four-handed to the turn with $123 in the pot. The 9 of spades added a flush draw and more straight possibilities to the mix so, of course, I led out again.

The river was a red jack. I led once more and the player to my left folded, but the player in late position raised. What? Just kidding! Would I be writing all of this if I lost the hand?

The player in late position made a crying call and I took down the $163 pot. My day was made!

The hand I enjoyed most since my last column, however, was one I was not in. As a matter of fact, it was the best result of a hand I have ever witnessed. The star of the hand was 95-year-old Louis Kellerian, who was playing in a $4/8 game where I work.

Louis started the hand holding Qd-Jd with one of our excellent dealers, Sal, in the box. The flop came Ad-Jd and a black 4. After an insignificant turn card, the king of diamonds hit the river and Louis (Louie) Kellerian had the first royal flush of his life. The table cheered!

Someone then mentioned our Royal Flush Progressive Jackpot. I went over and patted Louie (whom I have known for almost 10 years) on the back and congratulated him. He looked up at me with watery eyes and asked, “How much is it?” I told him, “$1,700.”

For all of you who have yet to make a royal flush, I hope Louie’s at least made your day. Gosh, I love poker!

A few weeks ago, I got the chance to go to Thunder Valley Casino (east of Sacramento) for the first time. The poker room was spacious, with high-back swivel chairs and rock pillars that accented a very nice poker-playing environment.

The entire staff was great, including the young man that seated me and got my chips. But the star of the show was Frances, aka “The Blonde.” She was a witty, clever, patient, professional dealer; the kind of excellent dealer who is skilled in both poker and prose … poetry in motion!

Thank you, Frances! You made my day and a lot of other peoples’ as well.