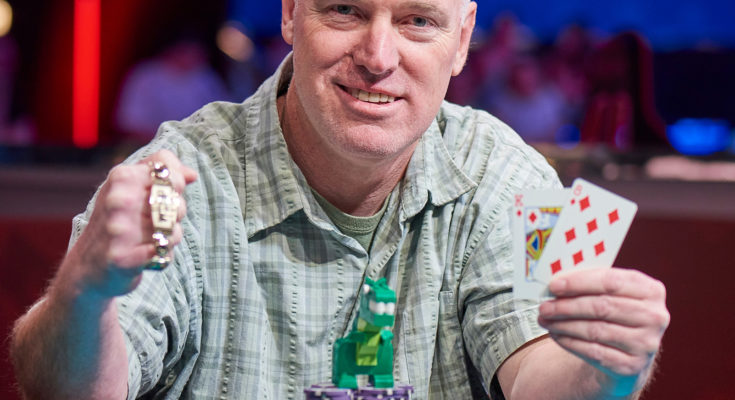 On Friday, June 15 Matthew Davis from Dublin was one of the record-setting 5,918 entries in the World Series of Poker’s popular $1,000 Seniors No-Limit Hold ’em event.

On Monday, June 18 he was a bracelet-owning champion in his first year of eligibility in the age-50-and-over tournament—and $662,678 richer.

He was joined at the final table by Yuba City’s Rachel De la Torre. She came in sixth place and scored $129,626.

The tournament was originally scheduled to end the previous day (Sunday), but due to the huge turnout they had to finish the final table a day later. Considering the amount of money at stake, Davis was able to get an extra day off from his job teaching statistics at Hayward’s Chabot College. And what a day off it turned out to be!

A lot of things went right for Davis on Monday, where he was one of the chip leaders throughout the day. That included his elimination of De la Torre on hand 60 of the final table. Davis raised to 280,000 from under the gun with 10h-10c and De la Torre called from the big blind with 10s-10d. With a flop of 9s-8h-2h De la Torre moved all-in with 870,000 and was snap-called by Davis.

What looked to be a chopped pot went Davis’ way when the turn and river were 9h and Qh, giving him the runner-runner flush to snag the pot and end her day in sixth place. “I don’t like to it go down that way,” he said later. “I’d almost like to forget that hand.”

On hand 98 Bill Bennet raised to 425,000 under the gun and Davis called from the button. On a Qc-5c-3c flop Bennet bet 750,000 and Davis called. The turn was the 10s and Bennet shoved for a little more than 6 million. Davis, with a stack only slightly larger, quickly called and showed the Ac-Jc for the nut flush. Bennett had 10h-10d. He had turned a set but would need the board to pair up to make a full house to avoid elimination.

The 4h on the river was a blank, sending Bennett to the rail in fifth place and virtually doubling the stack of Davis.

After making it to heads up with a slight lead against Bill Stabler of Salem, Ore., Davis went through a patch of cold cards for a while but managed to survive several ups and downs, getting as low as 8 million to Stabler’s 21 million.

Soon after their dinner break Davis snagged the lead, only to relinquish it again, then get it back in time for the final hand of the contest.

Stabler raised preflop to 950,000 and Davis called. After a flop of 6d-2d-3h Davis checked and Stabler bet 1.5 million, to which Davis answered with an all-in. After a short deliberation Stabler called and showed 3s-5d for a pair of threes. Davis announced, “I want to see diamonds, and then I am going to buy my wife some,” as he tabled Kd-8d.

The turn paired the board with the 6c and the river was also not a diamond—the 8c. Stabler clapped and turned around to celebrate, only to see the dealer pointing in Davis’ direction. While they were both looking for that elusive diamond, Davis had managed to pair his 8 which was good enough for the title.

At his post-win interview, Davis related a story from his first WSOP experience. “It was a $1,500 event, about 10 or 11. It was 10 percent of the field back then [who cashed], and I cashed, but it was barely over a min-cash. I made the money with three big blinds or something. I was talking to my daughter after the score—she was like in first or second grade—and she asked me, ‘How much did you spend to enter the tournament?’ And I told her it was one thousand five hundred dollars.

“She said, ‘That’s kind of a big risk.’ I was just curious; what did she even mean by that? Six, seven years old, right? So I asked that. ‘What do you mean?’ And she said, ‘You’re not that good at poker.’”